It's not particularly curious for state or federal lawmakers to accept campaign contributions from real-estate developers or construction contractors. In fact, it's common practice. 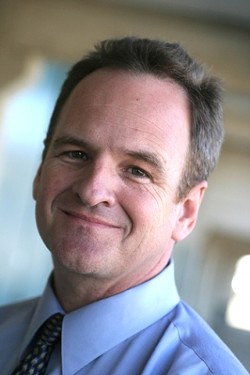 # In an adequate regulatory climate, the separation between the two entities remains substantial enough to curb potential conflicts of interest. County, municipal, or district officials typically make decisions on development and oversight of respective projects. The higher-up policymakers, therefore, claim no direct control over an individual undertaking with extremely rare exceptions.

Then again, "politics as usual" has never been an apropos description of the situation in Los Osos. Why start now?

Tucked among a roll call of developers in Assemblyman Sam Blakeslee's (R-SLO) 2006 campaign contribution listing is a trio of maximum allotted gifts ($3,300) from two players in the sewer debacle.

The more contested contribution, however, arrived in the form of two separate maximum gifts from Tim and Mary Barnard, dated March 29. Tim heads Barnard Construction of Bozeman, Mont., which owned the contract to build a traditional gravity-collection system that would have fed into the proposed plant at Tri-W.

Both parties posed litigation against the CSD for lost revenue when the state water board seized the loan on the project. The assembly bill, however, makes no effort to impact the goings-on in the judicial arena. In actuality, it keeps as far away from the courts as possible. The connection to Assemblyman Blakeslee proves more of a subtlety.

Barnard is one of a few contractors directly in line to benefit if the county opts to discard plans for a pressurized effluent collection system recently designed by engineering firm Ripley Pacific in favor of the traditional gravity system. Blakeslee drafted the piece of proposed state legislation that hands the reins over to the county and, in June, public works strung together a proposal to reconvene with gravity.

Blakeslee responded that his office took no part in drafting the engineering specifics section of the county plan, a point confirmed by public works deputy director Paavo Ogren.

Regardless, a transfer of power to the county, matched with the right decisions, constitutes an ideal situation for the hired contractors. Bankruptcy of the CSD, on the other hand, sits at the opposite extreme. Elsewhere on that gamut, an effluent system would keep the violated contracts tied up in expensive litigation.

Tim Barnard did not respond to phone messages.

"It's interesting that the Barnard contribution happened during the freeze," commented CSD board member Lisa Schicker, referring to the winter juncture when money flowing to contractors hired by the old CSD trickled out.

Even more interesting, posed activist Al Barrow, is where the money went afterward. Blakeslee appears to have donated the $6,600 from the Barnards to the nonprofit Court Appointed Special Advocates (CASA) sometime in July. The charity dated the receipt of a gift as July 20, two days after an e-mail from CSD board member Julie Tacker to New Times illuminated the existence of the Barnard contribution.

Blakeslee explained that Barnard originally offered the contribution last fall as a show of respect for his efforts in mitigating the dilemma in Los Osos, but the assemblyman turned it away because it "was just too close to home." When the sewer process broke down after the recall election, Barnard made another offer and, this time, Blakeslee accepted.

When plans got rolling again, the gift still sat in the campaign coffers.

If the county returns to a gravity system, officials said that revisiting those contracts makes the most fiscal sense, and the ultimate decision pending the passage of Blakeslee's AB2701 rests at the county's discretion. But for that situation to materialize, the CSD would still have to hand over the contracts. Their refusal, conversely, would amount to something of a fiscal filibuster, as their preference strongly lies with a pressurized effluent design.

Public works' Ogren maintained that the county hopes to avoid another major entanglement and plans to take a closer look at the Ripley Pacific proposal. Meanwhile, a frustrated regional water board continues to push for the gravity system already a few feet off the starting block.

"It's hard to imagine a situation that's going to please everyone," Ogren said.