Sex, drugs, and rock ’n’ roll. It’s a three-for-one package deal corrupting the youth of America, and it all started with Elvis.

In Refried Elvis, a fun, fast-paced original musical at Cuesta College, everyone from conservative church-going moms to the FBI (and of course the screaming teenage girls) wants to get their hands on Elvis, who is basically the antichrist.

The bubbly comedy was recently tapped to be featured at the 2016 Kennedy Center American College Theater Festival in Hawaii. The cast and crew of Refried Elvis, which re-imagines the cultural phenomenon surrounding Elvis Presley’s rise to fame, will travel to the festival on Feb. 9, where they will perform on the campus of the University of Hawaii in Honolulu. Refried Elvis will compete with other colleges for regional and national awards. The show is the brainchild of husband-and-wife team Philip, who us a Cal Poly lecturer in the theater and drama department, and bree valle, who wrote and directed it.

Fans of the King will recognize the music in the show, but the lyrics might throw them. That’s because Philip, who wrote Refried Elvis, changed up the majority of the lyrics to avoid copyright infringement and to help move the story along. 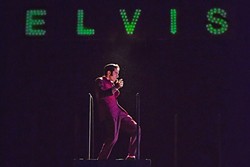 “This is all set in 1956, which is the first year that Elvis appeared on television. And as soon as he did, he was Public Enemy No. 1, and everyone was like, ‘He’s corrupting the youth! How do we stop him?’ They literally marched in the street and burned his records,” Phillip said. “It’s still true today, we’re all worried about our youth being corrupted by hip-hop or whatever artist. We all have to make decisions about that.”

The show ran last semester, but when the actors first came in for auditions, they didn’t have a script to work with. Philip wrote each part for the actors they ended up casting.

“Having a playwright here and writing parts specifically for the actors has been incredibly challenging, but also rewarding in that each person gets to be showcased,” bree, Refried Elvis director and head of the drama department at Cuesta, said.  “It’s truly an ensemble piece. The music is really fantastic, and I’m a big Elvis fan.”

Philip knew that they might have to bail on the idea of an Elvis show if they couldn’t find the man who could fill the metaphorical blue suede shoes. And then, they found him.

New Times got to grab a quick word with the man who just might be the next coming of Elvis. Tony Costa, a lifelong fan of the King and an accomplished guitarist, knew all Elvis’ songs before auditions started.

“It’s a dream come true to play Elvis,” Costa said. “He’s one of my idols, so to actually be able to be the man is more fun than most people can imagine.”

Don’t miss the chance to catch this rocking cast before they make it big. Refried Elvis will be showing from Jan. 21 through 24 at the Cuesta Cultural and Performing Arts Center.

Ryah Cooley would like a little less conversation and a little more action at rcooley@newtimesslo.com.