Blast from the Past: 8 Mile 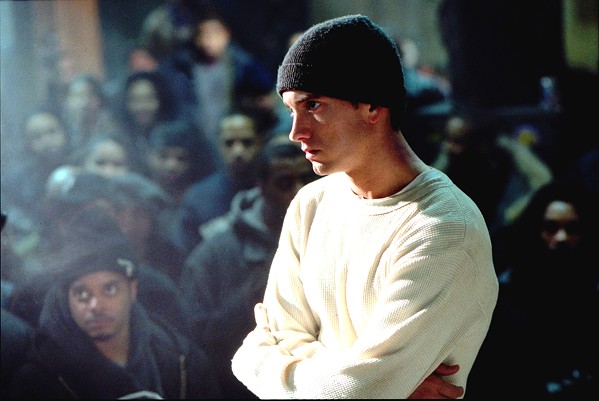 When Eminem burst onto the rap/pop culture scene in 1999 with the shocking and brilliant The Slim Shady LP, he horrified suburban parents across the nation. America heard an unhinged, angry wordsmith throwing up a violent middle finger to pretty much everything and everyone—and having fun doing it.

It wasn't until 2002's The Eminem Show that the Detroit-raised rapper started shedding that persona a bit, writing more personal (but equally shocking) songs about the pain that was behind it all. By no mistake, that same year, Eminem starred in 8 Mile, a film based on his own upbringing as a poor, aspiring white rapper outside predominantly black Detroit. While 8 Mile feels cheesy and self-serving in 2019, it features a genuinely compelling performance by Eminem and serves as a reminder of his immense impact on music and culture across racial lines.

Eminem plays Jimmy "B-Rabbit" Smith Jr., a young adult who just split up with his girlfriend and, broke, must move in with his mother and her abusive boyfriend in a downtrodden trailer off 8 Mile Road in Detroit. We first see Rabbit in a club bathroom, where he's puking in anxious anticipation of an upcoming rap battle (if you don't know what this is, it means you should watch 8 Mile). Rabbit has genuine talent and fire, but no one sees it because, well, no one has really seen a white guy try to rap. Many don't want to see it, except his small crew of loyal friends, which fortunately for Rabbit includes the host of the battles, Future (Mekhi Phifer), a well-respected member of the community.

Rabbit bombs at that first battle, freezing up when it's his turn to spit insults at his opponent in front of a blood thirsty crowd. "Choke! Choke! Choke!" they jeer at him. Stripped of confidence, he spends the bulk of the rest of the movie redeeming himself while navigating family troubles—protecting his alcoholic mother (Kim Basinger) from her boyfriend (Michael Shannon), and then his much younger sister, Lily (Chloe Greenfield), from both of them; holding a job at a car factory; and getting in near fatal tussles with competing rap groups. All the while, he's building up his mojo to go on stage again.

The plot details of 8 Mile are forgettable, but that doesn't matter much for this flick. We're here to see Eminem in action, to learn about the human being behind the novelty, to watch him persevere and kick ass. At those objectives, 8 Mile delivers. It's a satisfying treat watching Rabbit overcome his struggles at the climactic rap battle, and then hearing the Academy Award-winning "Lose Yourself" play out over the closing credits.

There is, though, something uncomfortable about 8 Mile in 2019. Here we have a Hollywood portrayal of a successful white protagonist who fought to claim relevance in a music genre born out of African-American culture. We're supposed to feel sympathy for Eminem as a victim of racial stereotypes, but is that really the right frame for his ascension? What exactly is Eminem's place in hip-hop history? These questions are certainly raised with a new viewing and fresh perspective, and that's not a bad thing. (118 min.) Δ