Blast from the Past: A Face in the Crowd

Watching Donald Trump’s rise to power seems like the perfect time to revisit A Face in the Crowd, director Elia Kazan’s stunning take on Budd Schulberg’s short story about the rise and fall of a demagogue.

Andy Griffith—in a role about as far removed from his genial Sheriff Andy Taylor persona as you can get—stars as Larry Rhodes, a drunken drifter recruited from a rural Arkansas jailhouse by radio producer Marcia Jeffries (Patricia Neal) to sing on a small-town radio program. He’s a big hit thanks to his folksy demeanor, and soon he’s traded up to a Memphis TV show, under the stage name “Lonesome” Rhodes, and once again to a bigger TV show in New York City.

It’s not long before his popularity and power go to his head, and soon he begins to believe his own hype: “I’m not just an entertainer. I’m an influence, a wielder of opinion, a force ... a force!” he claims. He’s soon outgrown Jeffries, who feels she’s losing control of her Frankenstein’s monster as Rhodes’ popularity soars.

Abusive to his staff and turning his back on his legitimate wife who shows up in the wake of his fame, he soon spurns Jeffries, ending their affair and withdrawing his marriage proposal, instead marrying a 17-year-old drum majorette (Lee Remick), who he later features on his TV program. 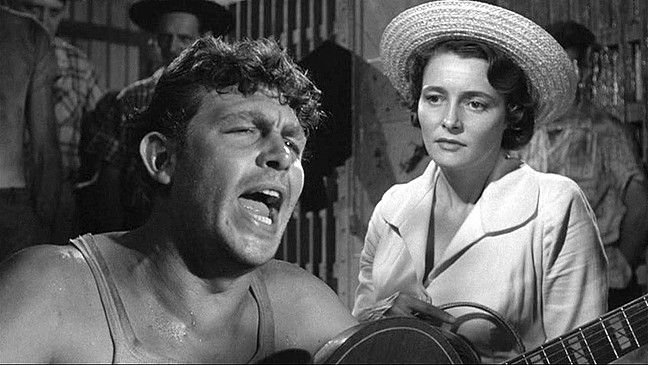 Things really begin to heat up when Rhodes is introduced to presidential candidate Sen. Worthington Fuller (Marshall Neilan) and hired to help him turn his image around. He soon begins to entertain delusions of grandeur and behind-the-scenes political power.

Rhodes loses it all when his real feelings about his followers is revealed: “Rednecks, crackers, hillbillies, hausfraus, shut-ins, pea-pickers—everybody that’s got to jump when somebody else blows the whistle. They don’t know it yet, but they’re all gonna be ‘Fighters for Fuller,’” Rhodes claims. “They’re mine! I own ’em! They think like I do. Only they’re even more stupid than I am, so I gotta think for ’em. Marcia, you just wait and see. I’m gonna be the power behind the president—and you’ll be the power behind me!”

I don’t want to reveal the ending, but suffice it to say, when a bloviating populist who cares nothing for the populace rises to the pinnacles of power, falling back to earth is a long way down. If you’ve never seen the film, it’s incredibly entertaining and insightful, and Griffith’s performance will blow you away. If you have seen it, it’s worth another look, and when the end comes, do as I do and imagine Trump’s puffy, orange mug in place of Griffith’s, and enjoy his fall. (126 min.)