Blast from the Past: Airborne 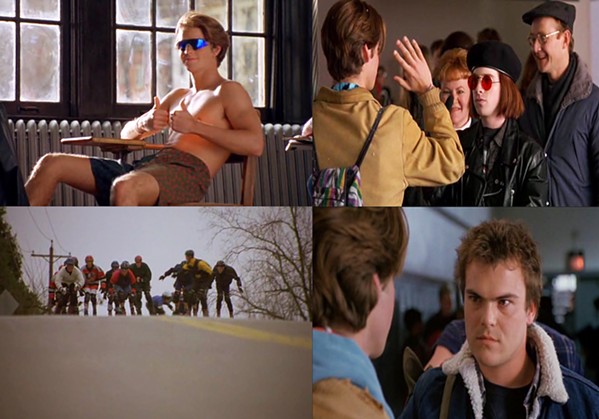 I don't want to start any fights (do I?) but Airborne is the most '90s film of all time. For years, a close friend of mine and I have sought to find that one movie that best encapsulates the decade we grew up in, and while some have come close, none reach the levels of absurd kitsch found in Rob Bowman's Rollerblade bound, teen comedy caper about a kid that moves from Southern California to Cincinnati in the dead of winter (think Johnny Tsunami but watchable).

Bowman went on to direct Reign of Fire, the first X-Files movie, and Elektra, and after that last one, I'm pretty sure every studio head industry wide decided he should never direct a feature-length film ever again. However, his contribution to the medium is undeniable. How many directors can claim they've made a movie that completely embodies a decade's essence?

With that being said, how does one go about calculating if a film is the most '90s movie of all time? Or the most reflective and definitive for any time period or era, for that matter? For me, it's about setting a series of criteria that allows for the most scientific process possible. In this case, I have a short list of questions I keep handy where I respond to each with a score ranging from 1 to 10.

Is there a soundtrack featuring grunge rock or Fresh Prince style rap? How many characters wear plaid, flannel, baggy clothing, denim, and/or backwards hats? Is there a battle between the "jock" and "nerd" high school hierarchies? How much contemporary slang is used (tubular, radical, etc.) wherein everyone sounds awkward saying it? Is the protagonist a pathological outsider with a mop-top and one earing? Does he (or she) inexplicably get the hot girl (or guy) at the end? Finally, does the balance of the universe hang upon the outcome of a pointless competition?

After multiple viewings and debate, no matter how I tried to knock it down, Airborne scored a perfect 10 in every category.

The opening credits feature some gnarly electric guitar solos and a bunch of Rollerblading highlights from the main character (Shane McDermott from All My Children) and his best buddy (who's named Kook, by the way, Kook) in San Diego. The whole sequence is nonsensical, over the top, and cheesy as hell. It also mirrors the film's [spoiler alert] climax that features a seemingly endless race down an imaginary hill in Cincinnati between the city's best Rollerbladers. I have watched this film more than 100 times and still have no idea what the point, goal, or reason behind that race is.

But it doesn't matter because Airborne isn't about thinking. It's about Seth Green—who plays the main character's cousin, Wiley—dressing as if Yoko Ono and Morpheus from The Matrix had a ghostly pale redheaded child. It's about Jack Black playing a bully named Augie who loves to play Nintendo, eat cereal, and punch people from California in the face. And most importantly, it's about watching a bunch of high schoolers aimlessly shred a lot of concrete curbs and sidewalks trying to prove a point that still escapes me.

I'd like to write an ending to this column, but in the spirit of Airborne, I'll keep it simple and take the coward's way out.