Blast from the Past: Blade Runner 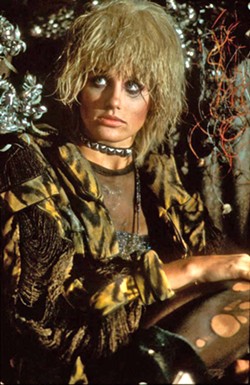 Is he or isn't he a replicant? That's the question! With the long-awaited Blade Runner sequel—Blade Runner 2049—scheduled to hit theaters on Oct. 6, the time seems right to revisit where it all began, director Ridley Scott's dystopian sci-fi classic about a cop named Rick Deckard (Harrison Ford), whose job is to track down and dispatch "replicants," humanlike androids gone rogue. The film is loosely based on sci-fi writer Philip K. Dick's 1968 novel Do Androids Dream of Electric Sheep?

Since its release 35 years ago, fans have puzzled over whether Deckard himself was a replicant. Who better to track down and terminate superhuman androids than another superhuman android? In the theatrical cut, it's left ambiguous. If you've seen Scott's director's version The Final Cut, it seems sure Deckard is, but with director Denis Villeneuve (Arrival, Sicario, Enemy, Prisoners) at the helm of the sequel and a story by Hampton Fancher and Michael Green, we'll see where the new film takes us.

The only way to tell a human from a replicant is to administer the "Voight-Kampff" test, which examines replicants' emotional responses to a series of questions. So to see if the test works, Deckard goes to the Tyrell Corporation, which manufactures the replicants, and he administers the test on corporation head Eldon Tyrell's (Joe Turkel) assistant Rachel (Sean Young), who in fact is an experimental replicant who believes herself to be human. So begins Deckard's foray into the underbelly of LA and his search for Leon (Brion James), Roy Batty (Rutger Hauer), Zhora (Joanna Cassidy), and Pris (Daryl Hannah).

The film is notable for several reasons. Its futuristic LA is brilliantly conceived as a dark, sprawling metropolis inhabited by various ethnicities whose language has become a pigeon amalgam of English, Spanish, and Asian tongues. It's visually amazing. Its Vangelis-composed soundtrack delivers a brooding, synth-driven, futuristic sound that compounds the film's eeriness. It started a mad rush to adapt Philip K. Dick's work to the big screen. Though originally garnering mixed reviews, it's now considered one of the best sci-fi films of all time. The acting is amazing, and there's a lot to puzzle over.

Harrison Ford returns to reprise his role as Deckard in the new one, which also stars Ryan Gosling as a new Blade Runner, Officer K, who tracks down Deckard in an effort to discover a long-buried secret. Is he or isn't he? (117 min.) Δ