Blast from the Past: Cockfighter

Anything that will fight to the death and not utter a sound, well … ,” narrator Frank Mansfield (Warren Oats) trails off in the opening voiceover to Cockfighter, the 1974 cult classic from schlock king producer Roger Corman, director Monte Hellman (Two-Lane Blacktop), and screenwriter Charles Willeford, upon whose novel the film is based.

Frank is deeply involved in the illegal cockfighting underground, and as the film opens, we discover that he’s mute. He and his too-young girlfriend Dody White (Laurie Bird) have arrived at a farm to face off against Jack Burke (Harry Dean Stanton), with whom Frank has a friendly rivalry. Frank, a degenerate gambler, bets his car and trailer to Jack, and when he loses it all, he throws Dody into the deal and walks off, penniless, birdless, and determined to fight his way back. 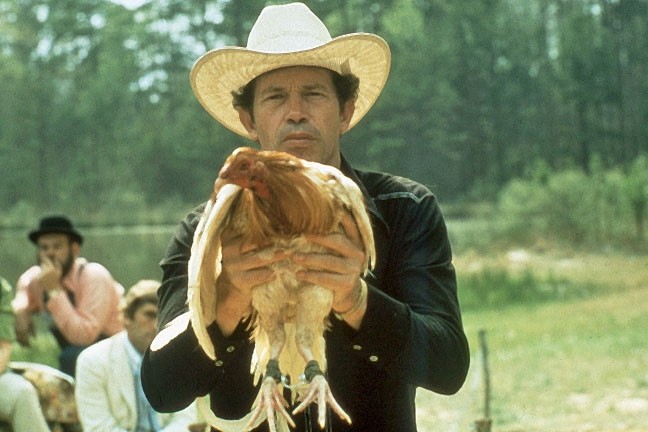 We learn in flashback that Frank’s drunkenness, big mouth, and even bigger ego lost him a chance at the Cockfighter of the Year medal—an episode that led to his vow of silence. Like the birds who will fight to the death without a sound, Frank returns to his home and begins to silently rebuild his cockfighting stock while also reconnecting with his old flame Mary Elizabeth (Patricia Pearcy), as he works toward winning this year’s medal.

That’s about as far as the plot goes, but this fantastic ’70s film offers an amazing character study of an existentialist backwater anti-hero. Oats has rarely been better, and his character is forced to choose between Mary Elizabeth and his fighting birds—one guess as to which one wins out. The film’s symbolism is complete when Frank wins Cockfighter of the Year and regains his voice as Mary Elizabeth leaves him.

As she walks away, he turns to his business partner Omar Baradansky (Richard B. Shull), grins, and says, “She loves me.”

This film’s not for the faint of heart. The cockfighting scenes are real and they’re brutal. Strangely, it was a film that couldn’t find an audience upon its release. Corman said it was the only movie he backed in the ’70s that didn’t make money, and he actually recut and reissued it under the title Born to Kill, and it still didn’t gain acclaim until years later.

It’s worth noting that Corman has produced 410 films in his still-going career, and of his 1974 films—The Arena, Caged Heat, Candy Stripe Nurses, TNT Jackson, Dirty Duck, and Big Bad Mama—Cockfighter is definitely his best. (83 min.)