Blast from the Past: Cool Runnings

One of my favorite holiday traditions in my family is the nights we inevitably spend re-watching some of our old favorite movies together. I assume most families have these—the films that you and your siblings wore out on VHS growing up, the ones that fill you with nostalgia and a cozy feeling whenever the opening credits roll. One of those flicks for me, which we watched recently over Thanksgiving, is the 1993 sports comedy Cool Runnings. 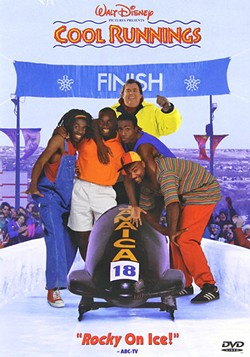 Cool Runnings is the perfect tweenage kids' movie, parents take note. It's hilarious and quirky. It's breezy. It's dramatic. It's inspirational. It's about the underdog. Loosely based on the true story of the 1988 Winter Olympics, the film tells the tale of the first Jamaican bobsled team and its unlikely path to a respectable showing at the Olympics in Calgary.

When Jamaican track star Derice Bannock (Leon) gets accidentally tripped during his 100-meter Olympic qualifying race, he gets the wild idea to try to form a bobsled team instead. Many years prior, an American bobsledder, Irv Blitzer (played wonderfully by the late John Candy), had tried to recruit Derice's father and other sprinters for one.

Derice, determined to be an Olympian, convinces his goofy friend, pushcart racer Sanka Coffie (Doug E. Doug), to help form the long-lost bobsled team, and they recruit the guy who tripped Derice at the qualifier (Rawle D. Lewis) and the other sprinter who got tripped (Malik Yoba) to join the squad. Blitzer, who lives on the island as a depressed bookie, long disgraced from the sport of bobsledding after a cheating scandal, agrees to coach them.

Cue a hilarious montage of the four young men screaming wildly as they bomb down a hill in a pushcart-turned-sled, and we're off to the races! Most of the world thinks they're crazy—I mean, a Jamaican bobsled team, really?! Even their native Olympic officials are convinced they'll embarrass the country. But the five-some doesn't care; they believe in their cause and each other. The remainder of the film tracks the team's journey to Calgary, with its many ups and downs, in a fun and touching way. Needless to say, the Jamaicans shut up their naysayers by the closing credits.

While I called this the perfect kids' movie at the start, Cool Runnings is plenty enjoyable for teens and adults too. In my most recent viewing, I was able to appreciate some of the more mature themes and character nuances that went right over my head as a kid. The relationship between teammates Junior Bevil and Yul Brenner, initially antagonistic as Yul holds a grudge against Junior for tripping him and Derice, blossoms into a strong, supportive brotherhood. A scene in Calgary where the two get into a bar fight with members of the mean-spirited German bobsled team is particularly memorable. Just before, Yul demands that the hopelessly timid Junior look in the mirror and tell him what he sees. "I see pride!" Yul pumps him up. "I see power! I see a badass mother who won't take no crap from no one!" The exchange perfectly sums up the essence of this '90s classic. Δ