Blast from the Past: Dolemite

And then there’s Dolemite (1975) starring standup comic Rudy Ray Moore as a pimp newly freed from prison after being framed by his nemesis Willie Green (D’Urville Martin, who also directs), who railroaded Dolemite so he could take over his action. Unlike the aforementioned great Blaxploitation films, Dolemite is decidedly awful—badly acted and directed, with a $100,000 budget that must have been spent on champagne-filled limos to drive the “actors” to the sets, because you sure can’t see it onscreen. So why bother highlighting it? Because Dolemite is so poorly made, it’s mesmerizing. More importantly, it’s an amazing cultural artifact 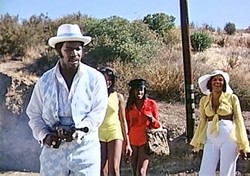 Blaxploitation films were made for a black urban audience, a way to give voice and power to a marginalized segment of the population that was yearning for strong black characters. Of course, most of these films were made in the ’70s, so while black men were given power roles, the films were still fairly misogynist.

“You forgot about the white ones,” Dolemite retorts.

Moore, who co-wrote the film, got the idea for the character after he heard a rhymed toast by a local homeless man about an urban hero named Dolemite. He developed the character and featured him on his debut 1970 comedy album Eat Out More Often, which climbed to No. 25 on the Billboard charts. Several more comedy albums featuring Dolemite followed, and soon the film featuring Moore’s friends and fellow comedians was conceived and filmed.

Vinegar Syndrome recently restored the film and released it on Blu-ray with a bunch of extras, and as a cultural artifact, it’s worth seeing. It is, after all, the beginning of a franchise. Its first sequel, The Human Tornado (1976), is by far the best of the bunch. There’s also The Return of Dolemite (2002; packaged in DVD as The Dolemite Explosion), and then there’s the loosely connected Shaolin Dolemite (1999).

Each is a fascinating look at the community fed up with Hollywood and taking control of its own cinematic arts. (90 min.)