Blast from the Past: Edward Scissorhands

The first thing that catches your attention are the eyes: deep brown pupils, nearly hollow in appearance and almost black in color—yet gentle and longing. Next, it’s the disheveled pairs of scissors: five bristling shears quivering on each arm where hands should be.

Edward Scissorhands is a hauntingly beautiful look inside of the mind of its outcast director, Tim Burton, portrayed through an artificial man with scissors for hands. The film is a gothic twist on a fairy tale with an outsider who finds love amid the mainstream segment of humanity. Edward (Johnny Depp) spent his days in seclusion inside a gothic castle atop a gray mountain looming over a pastel-colored suburbia. He’s an unfinished masterpiece and has been sitting in the mansion’s shadows since his creator (Vincent Price) died while presenting him with a surprise pair of new hands. He is completely abandoned until his local Avon lady, Peg (Diane Wiest), finds him in a desperate attempt to make a sale and brings him home. The scenes that follow lead to an unforgettable romance between timid Edward and Peg’s striking daughter, Kim (Winona Ryder). Depp and Ryder were also dating each other in real life at the time, and were one of my favorite iconic ’90s couples. 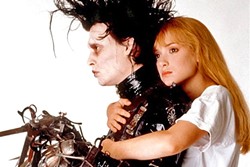 Danny Elfman (composer), Burton, and Depp—the holy trinity that marks nearly all of Burton’s films today—were at their humble beginnings when Edward Scissorhands was released. While the film marked Elfman and Burton’s fourth time collaborating, it was the first time that Depp and Burton worked together. Celebrities such as Tom Hanks, Jim Carrey, and Robert Downey Jr. were considered for the title role, but Burton chose Depp for his ability to act with his eyes. It paid off, as Edward Scissorhands stands as one of the most memorable films from the decade for many, due to Depp’s careful performance and timid demeanor. Despite being strapped from head to toe in leather while filming in humid Florida weather, Depp delivered a riveting performance through minimal dialogue and his sympathetic facial expressions.

In a town where husbands left for work in synchronized fashion and their wives can’t keep out of each other’s business, Edward brought the strange and unusual. Edward is a solemn-yet-charming self-portrait of Burton’s adolescent isolation. From an early age, Burton was fascinated with horror, monsters, and gothic fantasies, unlike his peers. Like Edward, Burton’s eccentricity challenged the norms of his urban, cookie-cutter surroundings in Burbank. In high school, he first sketched a man with scissors for hands, an image that inspired what Burton’s called his most personal film.

The film is monumental for a number of reasons: It was an opportunity for Burton to work with his lifelong idol, Vincent Price. It was the last film Price appeared in before his death, and it was the beginning of a partnership between Burton and Depp that’s lasted decades. (100 min.)