Blast from the Past: Evil Under The Sun

I have a deep love for cozy mysteries of all sorts but one movie stands above all the rest as my favorite of all time: Evil Under the Sun. 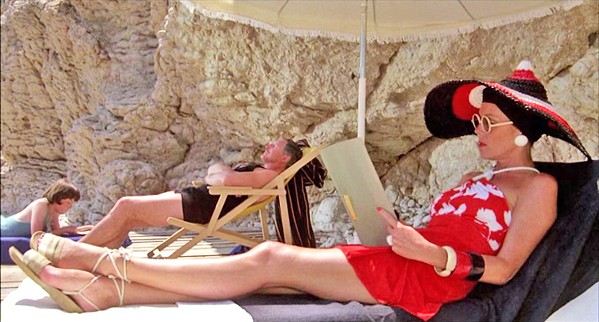 The film, based on the Agatha Christie novel of the same name, features Belgian detective Hercule Poirot (Peter Ustinov) who is summoned to help find a missing diamond by Sir Horace Platt (Colin Blakely). The diamond was a gift for Arlena Marshall (Dame Diana Rigg) but when they broke up and Marshall returned the diamond, Platt discovers it is a fake. Believing Marshall to have swapped out the real one for the fugazi, Platt sends Poirot to retrieve it from an island resort in the Adriatic Sea run by Daphne Castle (Dame Maggie Smith). That's where he finds Marshall on her honeymoon with the wealthy Kenneth Marshall (Denis Quilley) and his young daughter. It immediately becomes apparent Marshall is carrying on with Patrick Redfern (Nicolas Clay) right in front of them all, including Redfern's anemic wife Christine (Jane Birkin). Then, of course, someone is murdered.

I own it and watch it quite regularly, which is an accomplishment for a film where I already know whodunnit and why. But it's not so much the actual mystery, brilliantly constructed by Christie as usual, that makes this movie so rewatchable. It's the stellar cast of absolute film legends, camping it up in full 1980s splendor, and the covet-worthy fashions that keep me wanting to see it over and over.

This is a film that features Rigg (who would later go on to star in her own cozy mystery series, The Mrs. Bradley Mysteries) and Smith playing out a lifelong showbiz feud. It's a film that has the late great Roddy McDowall camping it up as a soon-to-be hasbeen writer. Not to mention the always charming Ustinov, who played Poirot in three movies decades ago and still holds up as one of the best to ever take on the role. And Clay in that speedo. So many screen icons, so little time to fangirl.

The costumes are another huge part of what make this film legendary. Birkin was such a fashion icon at the time that one of the most famous pieces of fashion in history is named after her, the Hermès Birkin bag. And in this film, Birkin cements why she was one of the most sought after muses in fashion. Her looks are masterpieces, from the demure evening gown she sulks around in for the dinner party, to the show stopping number she parades around in. Not to give anything away, but one of her amazing looks even becomes a sticking point for Poirot as he tries to piece the mystery together.

There is no higher fashion peak than watching Rigg in a Chinese straw hat spilling all the tea on her enemies, as they cower at her feet. I watch this film just so I can mimic her epic bitch face during the dance number.

Aside from A&E's stellar Poirot series, Evil Under the Sun is quite simply one of the best-filmed adaptations of a Christie novel ever. (117 min.) Δ