Blast from the Past: Friends

This column is "The One Where We Talk About Loving Friends," so if you don't like the show, I suggest you skip to the next article because I won't be holding back on my fandom.

In 1994, NBC launched a TV series about six friends in their 20s who live in New York and go through the motions of life together. 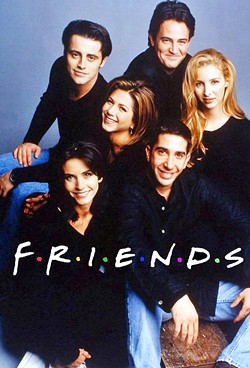 When I say together, I mean they're not shy about sharing information—like being married to a lesbian, having a questionable third nipple, dating an older man, or someone at work eating a Thanksgiving-leftover sandwich. You don't understand, that sandwich was the only good thing Ross had going in his life. I mean, come on, the guy (at this time in Season 5) was divorced twice and got evicted from his apartment.

Friends lasted for 10 seasons because it was in many ways relatable—OK, not the living in New York and being able to afford a pretty nice apartment part, but being so tight-knit with a small group of people.

My older siblings watched this show constantly when it was on-air. They're now nearing their late 30s and early 40s, but I didn't really understand what the fuss was about until high school, my college years, and the present. I'll admit it, Friends is the only series I'll watch from start to finish; I've done that more times than I can keep track of.

It was in my early 20s when I associated with Monica and her need to be organized; Rachel's drive to move up in a career she admired; Joey's struggle to be noticed in his career field; Phoebe's weirdness; Chandler's desire to be giving to his friends, and Ross' ... I actually don't connect with Ross.

If I had to rank all the characters from best to worst, he would be dead last. I just cannot sympathize with a character who whines all the time because his love life is on the fritz but has literally everything else going for him.

Anyway, the series left an impression on me because I wanted a close small group of people that I felt completely comfortable with, could be myself with, and could be friends with for a long time—even if life moved us in different directions. I wanted to be there for them, and I wanted them to be there for me, too (corny right?).

Whether it's Chandler's one-liners, Joey's disdain for sharing food, or the will-they-won't-they between Ross and Rachel, I laugh at every single episode even though I know exactly what's going to happen. The writing was funny, the life scenarios could happen, and the on-screen chemistry was alive and thriving.

So pivot your couch in the direction of your screen and look for the series that will always be there for you when your job's a joke, you're broke, and your love life is DOA. ∆