Blast from the Past: Godspell 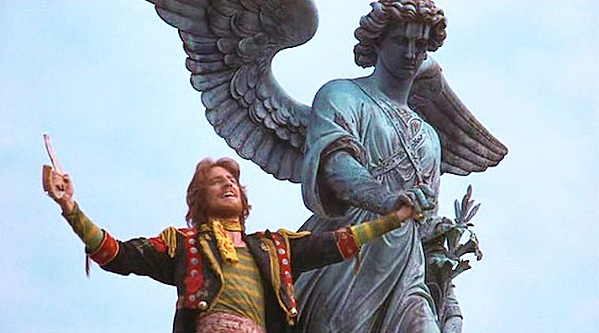 It's Easter morning. You've got your VHS copies of It's the Easter Beagle, Charlie Brown and VeggieTales: An Easter Carol ready to go, and all's right with the world. It's a tradition I'm sure we all share, but why not switch things up for once? The 1973 musical, Godspell, may not have Snoopy or Larry the Cucumber, but it does have Jesus. At first glance, you probably wouldn't realize the film's main character—a beardless white man with an afro sporting overalls and a Superman T-shirt—is Jesus (Victor Garber). But in the context of the movie, which sets the story of Christ in 1970s New York, it almost makes sense.

Based on the off-Broadway show—which premiered only a few years prior to this screen adaptation—Godspell revolves around Jesus and a band of enthusiastic, youthful disciples (nine rather than 12). The opening of the film shows each disciple abandoning their respective walk of life—one's a ballet dancer, one's a taxi driver, etc.—after hearing the call of John the Baptist (David Haskell), who urges them to repent, discard their earthly belongings, and be baptized in the Bethesda Fountain at Central Park.

The park is the first of many New York City locales to be beautifully showcased in the film, which was shot entirely on location. Other spots include Times Square, the Brooklyn Bridge, and Lincoln Center. There's even a dance number on the roof of the World Trade Center's North Tower, which was only nearing completion at the time of the film's production.

But what makes these set pieces so impressive is the way the film somehow disguises the city, making it look completely empty. Before the baptism scene, the film's setting is the New York we're used to seeing—crowds of people crossing intersections, taxi cabs driving around, and so on. But after the baptism, there aren't any other human beings in sight other than Jesus and the disciples. The whole city basically becomes their playground.

And I haven't even talked about the songs yet. Composer Stephen Schwartz, probably best known for Wicked, wrote all of them except for one—"By My Side" by Peggy Gordon. The song is the only one left over from playwright John-Michael Tebelak's original production of Godspell, which was his master's thesis at Carnegie Mellon University in 1970. Although Schwartz was brought in to write brand-new songs for the play, he insisted on keeping "By My Side" as he saw no point in trying to replace it.

"Where are you going? / Can you take me with you?" one of the disciples sings after Jesus wanders off alone, visibly worried about something. It's the moment the film takes its destined somber direction. There's something about the imagery of Jesus in the Garden of Gethsemane I always find moving, even when it's represented allegorically, here and elsewhere. I know I'm not the only one who gets emotional when Lucy and Susan Pevensie follow Aslan into the forest that fateful night in The Lion, the Witch, and the Wardrobe.

Well, you caught me. In case my trivia rambling didn't already give it away, I'm actually a huge Godspell fan, and the film takes a much higher priority than both Peanuts and VeggieTales on Easter Sunday. (103 min.) Δ