Blast from the Past: Hell Hunters

The ’80s were a special time for movies—an especially bad time! So much schlock came out full of silly plots, mindless action, and gratuitous nudity. Hell Hunters is exactly that sort of trashy fun.

A group of Nazi hunters is searching for the South American redoubt of Nazi doctor Martin Hoffman (Stewart Granger), who’s working to develop a serum extracted from spider venom that turns people into zombie soldiers. Amanda (Maud Adams), one of the Nazi hunters, goes as far as to marry Hoffman’s nephew, Karl (William Berger), in an attempt to learn the location of Hoffman’s hideaway, but she’s found out and Hoffman sends his henchman,
El Pasado (Eduardo Conde), to kill her with explicit instructions to make it look like an accident and not harm his nephew. Things don’t go as planned. 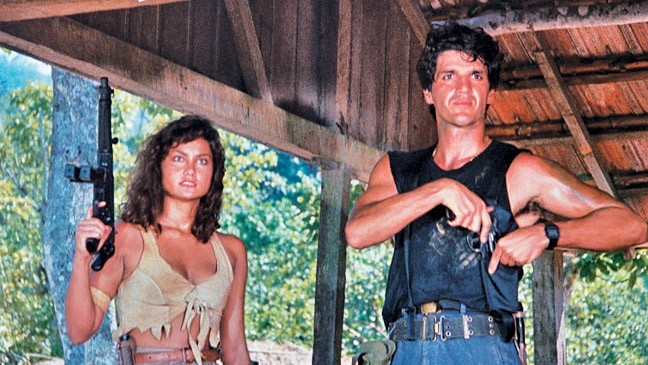 German sleaze auteur Ernst R. von Theumer (The Big Bust-Out, Red Heat) lingers over his lush jungle locations and takes obvious glee in putting his stunt men through their dangerous paces. It’s classic unregulated ’80s stunt work. There’re also plenty of opportunities for women to shed their clothing, whether during a carnival parade in Rio or when Nelia fights Hoffman’s henchmen in the jungle. Oops! My top got ripped open!

Much of the story is about the contentious relationship between tough jungle fighter and Nazi hater Tonio and innocent Ally, whose banter borders on the laughable. Naturally, the mismatched pair finds love, culminating in a naked shower in a jungle waterfall.

One-time Bond George Lazenby (On Her Majesty’s Secret Service) even makes a brief appearance as Heinrich, Hoffman’s operative who’s briefly on screen before he’s sent to Los Angeles, where Hoffman plans to test his serum in the water supply. If you blink, you might miss his appearance.

Films like these always seem to make a grab for legitimacy by hiring desperate has-beens like Adams, Lazenby, and Granger, whose careers were swirling the drain to irrelevance, but in the case of the latter, Granger seems like he was really having fun chewing the scenery as the Dr. Joseph Mengele-like mad scientist. “Those were the days,” he gushes as he watches old Nazi propaganda newsreels.

Daly, just 20 at the time, would go on to make a few more B-movies (Zombie 4: After Death, Liquid Dreams) and enjoy a stint on The Young and the Restless soap, but she was dead by 38 of suspected drug abuse. Nelia J. Cozza, who appeared nude in a few skin mags of the era, has a sizeable role but isn’t even credited.