Blast from the Past: House

You know how sometimes dreams, even the craziest ones, make total sense while you're in them, but when you try to explain them to another person you realize they were completely incomprehensible? 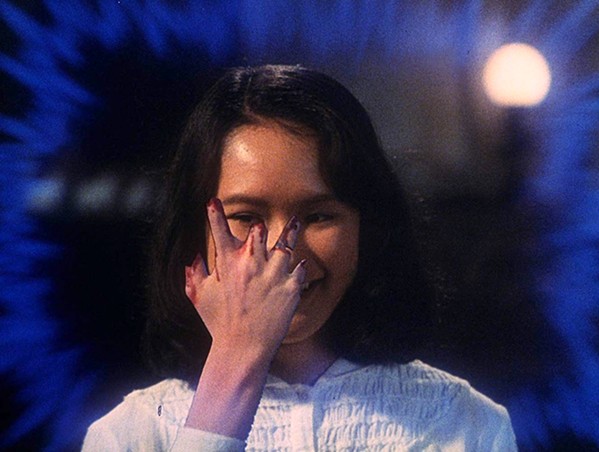 Well that's how it feels watching and then trying to write about House, a Japanese horror-comedy released in 1977 that I think is both an amazing masterpiece and also almost unwatchable.

The movie revolves around a group of young girls who are excitedly making plans for the upcoming summer vacation away from school. Normal, right? One, who is known as "Gorgeous" (Kimiko Ikegami) to her friends because of her beauty and style—a very reasonable nickname—plans a trip to see her long-lost aunt in an attempt to avoid her father and his overbearing new girlfriend.

Gorgeous' mom died when she was younger, and Gorgeous wants to find out more about her mother's sister, who lives in an empty mansion in a mostly unpopulated village. Uh oh.

Gorgeous invites six of her closest friends to join her on this family reunion, which is not an event my friends would be excited to go to, but hers are pumped. The friends also have nicknames inspired by their hobbies and basic characteristics: Mac loves to eat (lol same), Melody loves music, Sweet is really nice, Fantasy is always daydreaming, Prof is smart, and Kung Fu is great at, you guessed it, Kung Fu.

At this point we're getting into a weird Japanese horror version of the seven dwarves, which is generally pretty unsettling on its own. Then throw in a clearly malicious aunt living in a very obviously haunted house with a noticeably evil cat, and we've got ourselves a classic witch plot.

One after another, the girls go missing. Others start seeing things—a severed head in a well, furniture moving on its own, a grandfather clock overflowing with blood—and some become possessed by items in the house.

As things spiral into chaos and special effects become more prominent, the surreal aspects of House totally engulf everything else. These effects—monsters creeping through windows and crevasses, rooms flooding with blood, a magical cat in different forms—are cartoonish, giving the film a fever-dream vibe similar to that of Fantasia (1940) or Alice in Wonderland (1951), both movies that thoroughly freaked me out as a kid. According to Wikipedia, the most reliable source of information on the internet, director Nobuhiko Ôbayashi made the film purposely unrealistic; it was not at all due to a low budget or his own total lack of directing experience.

Whatever the reason, I'm glad House is the way it is. Some moments, like when one friend gets beaten to death by flying pillows or every time Kung Fu karate chops ghosts, are funny. Others, including a death by drowning in blood and a creepy hairy bath, are quite disturbing, even several decades later.

So whether you like dreams, nightmares, comedies, horrors, or just plain total originality, House is worth a watch. Δ