Blast from the Past: Jaws: The Revenge

You can never have too much of a good thing.

In the world of film, it’s a maxim that’s both true and untrue at the same time. Spurred by the prospect of keeping the cash rolling in, Hollywood is always looking to strike gold over and over again and has no qualms about going back to a successful film franchise over and over again.

Unfortunately, the rush to churn out sequels to a hit film usually results in mixed quality at best. Sure there are sequels that are just as good, and sometimes even better than their predecessors—James Cameron’s Aliens and Terminator 2 being two great examples—but those are mostly the exception to the rule. It’s far more likely that the more sequels a franchise gets, the more likely it will be that their quality will decline, and the magic that made the first film special and unique will fade. Like making a copy of a copy, you can only reproduce something so many times before it loses definition and meaning. 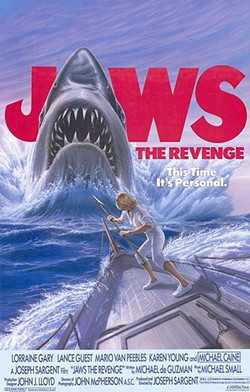 Such is the case with 1987’s Jaws: The Revenge. The movie is the third and final sequel to Steven Spielberg’s smash hit and cinematic 1975 classic. The film follows Ellen Brody (Lorraine Gary), wife of the original film’s hero, Chief Martin Brody. After her husband dies of a heart attack, and the movie’s titular shark attacks and kills one of her sons, Ellen moves from her home on a small New England island, where the first two movies took place, to the Bahamas where her other son, his wife, and child now live.

Of course, the massive Great White shark inexplicably follows Ellen to the island, intent on getting its revenge on her and her family. How or why a shark would hold a grudge or even know how to find an individual who wronged it is never explained. Even as a cash-in sequel, the film should have a lot going for it. Gary is the original actress from the first two Jaws films, and some decent supporting actors, including Michael Cain, flank her. Sadly, they can’t quite save the movie. The film was actually cast and pushed into development before a script was written, and it shows, both in the muddled plot and pacing, and in much of the dialogue. The special effects were poor, even for 1987, and while that might be excusable for a B-grade monster movie, they are a huge disappointment when compared with the groundbreaking (if dated-looking) special effects from the original film.

Still, the movie has its bright spots, one of them being that the main character is not only a woman, but also a 50-year-old grandmother. At a time when Hollywood did (and still does) relegate older actresses and the characters they play to bit parts, it’s refreshing to see Gary evolve from a hand-wringing wife and mother in the first film to an ass-kicking, shark-fighting grandma in the final film in the series. It’s an interesting spin on the character that, sadly, the movie itself doesn’t do justice to.

Today, there are far more incentives to do right by a film franchise when it comes to a sequel. For better or worse, legions of rabid fans can take to the internet and keep an eye on how producers, directors, writers, and actors are treating their beloved franchise. Because of worries about the backlash hurting box office revenues, studios seem to be far less willing to churn out shameless cash-ins for a quick buck, though it hasn’t stopped them completely.

In a time where sequels and reboots seem to be getting better treatment, it makes me wonder if we might see another entry in the Jaws series that will do such an iconic and excellent franchise justice. (89 min.)