Blast from the Past: Layer Cake 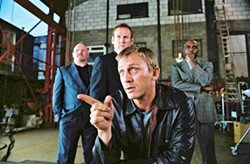 Before Daniel Craig (Casino Royale, Logan Lucky) was icing baddies behind the wheels of fast cars with femmes fatale in the passenger seat, he was known as a drug dealer. In fact, his portrayal of an unnamed (known only as XXXX in the original script) cocaine middleman trying to leave the "game" in Matthew Vaughn's Layer Cake landed him the role as the world's most famous spy, James Bond.

"I'm not a gangster, just a businessman. And my commodity happens to be cocaine," Craig tells the audience in his first moments of screen time. His character is a smooth operator, with endless mantras to keep his nose, hands, and drug money clean. "Always work in small teams. Keep a low profile. Never deal with anyone who doesn't come recommended."

Craig is constantly spitting these fourth-wall-breaking asides, and his narration is easily one of the film's highlights.

Vaughn would go on to direct Stardust, Kick-Ass, X-Men: First Class, and the Kingsman movies—and while all are relative commercial successes, none quite pack the punch of his first feature-length film.

Layer Cake begins with Craig delivering a monologue over a series of quick cuts, which evokes Martin Scorsese standards like Goodfellas so casually you'd swear the master had a hand in the movie's production. Vaughn wears his influences on his sleeve in this one but does so deftly without insulting the viewer while Layer Cake's plot stays fresh enough to not be considered downright thievery.

On more than one occasion, I've described the film as the best movie that Guy Ritchie never made.

I always thought this was a clever description but after discovering during research that Vaughn received producer credits for Ritchie's Snatch and Lock, Stock, and Two Smoking Barrels, I am less convinced. Regardless, fans of those two grimy British crime vehicles would do themselves a disservice if they didn't give Layer Cake a try.

Indeed, while most of the story revolves around dark and gritty subject matter, splashes of humor help keep the wheels turning. In one scene, Craig is confronted over the phone by an Eastern European assassin (only known here by the fantastic name of Dragan) attempting to recover stolen drugs and money. The man is a known killer and had just murdered someone near Craig in the previous scene.

"I've got an idea," Craig says to Dragan. "Why don't you come 'round for breakfast? I'll squeeze some orange juice and grind some coffee and we can talk about this like adults. How's that sound?"

"Do you know where I live?" Craig asks.

"Well, fuck off then," Craig says before hanging up.

The film unfolds slowly but is punctuated by moments of intense violence and suspense. Cap in some outstanding performances from Craig; an underused Tom Hardy as his right-hand man; Jamie Foreman as a loose cannon, low-level drug dealer trying to make a big score; and Kenneth Cranham as the all-powerful kingpin lording over London's underground, and you have one of the best crime films of the past two decades.

Good luck scraping your jaw off the floor following the twist ending. Δ