Blast from the Past: Liquid Sky

Co-writer/director Slava Tsukerman (Poor Liza, Perestroika) directs this sci-fi cult classic about invisible aliens who come to Earth in their tiny flying saucer to find heroin, only to discover that pheromones created by the human brain during orgasm are even better. 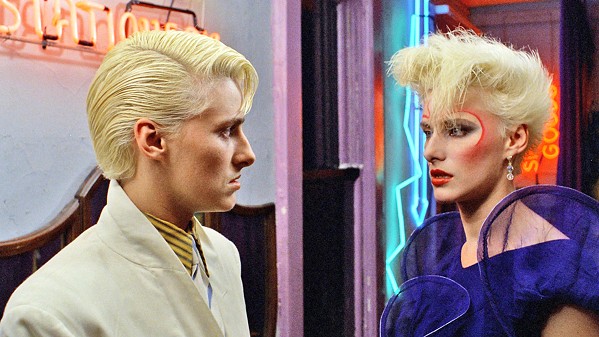 The film stars Anne Carlisle (who also co-wrote the film) in a dual role as Margaret, an androgynous bisexual nymphomaniac fashion model, and Jimmy, her androgynous gay nemesis fashion model.

Margaret lives in a New York penthouse with her musician drug-dealing lesbian girlfriend Adrian (Paula E. Sheppard), upon whose roof lands the alien ship. Whenever we see events from the alien point of view, the image turns into a colorful and distorted cartoon of bright colors. Think bad acid trip!

I wish I could tell you this is an amazing film, but it can be pretty hard to watch, and at nearly two hours, it's pretty slow for a film about the New York fashion scene, drug use, rampant sex, and space aliens. Instead, this is mostly of interest as an artifact of the '80s—the New Wave hair, clothes, ominous and dissonant synth music soundtrack, and me-first/me-only attitude. Aside from being a cult classic, it's also credited with inspiring the so-called "electroclash" club scene that emerged in the early 2000s in London, Paris, Berlin, and Brooklyn.

After its initial August 1982 release at the Montreal Film Festival, where it won the First Jury Award, it became 1983's most successful independent U.S. release, grossing $1.7 million on a $500,000 budget, most of which seems to have been spent on hair gel.

Aside from the drug- and sex-addicted models and club kids, there's a side plot involving German scientist Johann Hoffman (Otto von Wernherr), who's seen observing the aliens from the Empire State Building. His explanations are responsible for making sense of the alien plot. When the observation deck closes, Hoffman seeks help from his only American friend, college drama teacher Owen (Bob Brady), who it turns out had an affair with his former student Margaret.

Basically, anyone who has sex with Margaret dies upon orgasm with a crystal protruding from their skull. Margaret is apparently immune because she doesn't reach orgasm, but she does realize the new power of her sexual relations and begins using it to dispatch those she despises.

It's dark and weird and full of film school trickery. The real question is if this is an earnest exploration of drug addiction or a dark and comic satire. Hell if I know! Rocky Horror Picture Show it's not, but over the years it's enjoyed midnight screenings with costumed attendees. As one commentator noted, "Being a fan of Liquid Sky carries the cachet of degenerate hipness to this day." (112 min.). Δ