Blast from the Past: Little Shop of Horrors 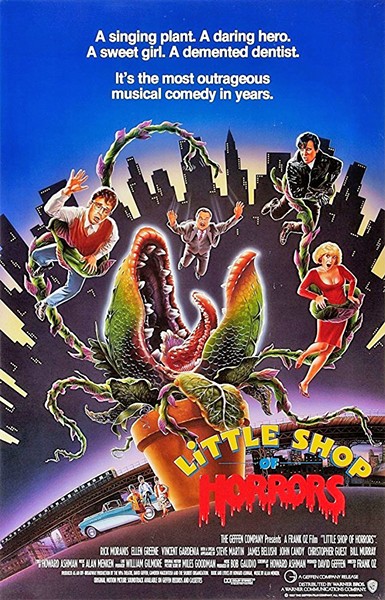 At a time when American cinema is seemingly obsessed with mining our nostalgia for bankable box office reboots, it still amazes me that no one, to my knowledge, is pushing to get a remake or reboot of Little Shop of Horrors into theaters.

Then again, when you watch director Frank Oz's 1986 adaptation of a an off-Broadway musical production based on Rodger Corman's low-budget tale of a man-eating plant from outer space setting up shop in a dumpy florist shop in a run-down skid row neighborhood, its clear that there's very little room to improve upon this comedic classic.

It's hard to find a place to begin when it comes to what makes this movie so special, but a good start would be the absolute murderer's row of amazing comedic actors that make up the cast. Of course Rick Moranis is pitch perfect as the painfully nerdy flower shop assistant Seymore Krelborn, as is Steve Martin as the sadistic dentist who ends up as the monster plant Audrey II's first victim. But looking past the amazing leads reveals a stunning array of legendary comedians cast in bit parts in the film. Those include late greats like John Candy as radio DJ Wink Wilkinson, Jim Belushi playing as sleazy marketing executive, and Bill Murray in a scene stealing performance as the buttoned-down masochist seeking out a spot in Martin's dentist chair.

In spite of the considerable talent of the human actors, the real standout cast member is Audrey II. Despite being made 30 years ago, the practical effects wizardry that brought the giant plant, voiced by Levi Stubbs, to life holds up incredibly well. Even more impressive is the fact that Oz and his crew of FX magicians were able to make the Audrey II puppet not only talk, but move and sing in rhythm with live cast members in a time before computer generated animation would have made the task much easier. Being something of a glutton for pre-CGI special effects trivia, I did some internet sleuthing and found out that in order to get Audrey II's movement to look more realistic, the filmmakers actually shot the puppet at a slower film speed.

Thanks to the internet, there is no shortage of oft-forgotten film classics that find new audiences to keep their memory alive. Hopefully, Oz's Little Shop of Horrors will continue to benefit from such efforts, as it is not only a great little movie, but a time capsule or sorts, a reminder of an era of amazing comedic actors, some of whom are dead or no longer acting, as well as a testament to the amazing achievements of special effects in a pre-CGI Hollywood. (94 min.) Δ