Blast from the Past: Matewan

Writer-director John Sayles (Eight Men Out, The Secret of Roan Inish, Lone Star) helms this story—based on the true event of a 1920 coal miners’ strike in Matewan, W.Va.—about a labor unionizer named Joe Kenehan (Chris Cooper in his film debut) who comes to the embattled community that’s being brutally dominated by the Stone Mountain Coal Company and its hired thugs.

When the Stone Mountain miners threaten to organize, the company lowers their wages and brings in African-American replacement workers by train, which the miners stop, subsequently attacking the “scab” workers. Kenehan, a fellow train passenger and organizer for the United Mine Workers, witnesses the event and takes up residence in Matewan in a boarding house run by a miner’s widow, Elma Radnor (Mary McDonnell), and her 15-year-old son, Danny (Will Oldham), also a miner and youthful Baptist lay preacher. 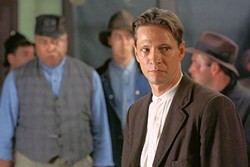 Can the new African American workers as well as a contingent of Italian workers join the veteran coalminers, setting aside their differences to use their combined labor power to force the mining company to offer fair wages and conditions? Can Kenehan keep the striking workers from resorting to retaliatory violence against the company’s thugs, which he argues will weaken their cause? And can the workers survive the armed strikebreakers?

There’s a surprising amount of intrigue throughout. Has the striking miners’ group been infiltrated? Will the mining company’s dirty tricks get Kenehan in hot water with the striking miners? This period drama is a page ripped from American history about a time when workers had few rights and were at the mercy of their business overlords.

Like its Appalachian setting, the story has all the earmarks of a plaintive mountain ballad about an American tragedy. It’s a simply and lovingly told story about American industrialization and the common man’s struggle over oppression of the robber barons, who willingly use violence to achieve their goals.

Beautifully shot by Haskell Wexler (One Flew Over the Cuckoo’s Nest, Who’s Afraid of Virginia Woolf, In the Heat of the Night), the film also boasts a great cast of supporting actors including James Earl Jones, David Strathairn, Kevin Tighe, and Josh Mostel. The performances alone make the film worthwhile—this is incredible ensemble acting—though the story comes off as a bit too black and white. There’s no doubt who the good guys and bad guys are. That said, this earnest and sympathetic film is at its best when it portrays its country folk trying to live their lives with dignity.

Perhaps more importantly, it feels timely. As we see workers’ rights continue to erode, the offshoring of manufacturing jobs, and a general assault on unions, Matewan reminds us of the hard-fought battles that proceeded workers’ rights in this country. It’s a history lesson we’d best not forget.