Blast from the Past: Mighty Morphin Power Rangers: The Movie

For the last 10 years or so, Hollywood's been mining the depths of millennial nostalgia in hopes of striking gold. With the success of rebooting well-loved childhood cartoon franchises like Transformers, Teenage Mutant Ninja Turtles, and GI Joe, it was only a matter of time before Mighty Morphin Power Rangers got its turn.

But as the reboot of the massively popular '90s television show and toy line makes its 2017 debut, let's not forget that this isn't the first time the Power Rangers and their giant monster-fighting robots have graced the silver screen.

Mighty Morphin Power Rangers: The Movie was released in 1995, at the height of the television show's popularity, when the same 18 to 35 year olds that the 2017 film hopes to capture were tuning in to the show each day and begging their parents to shell out money for an ever-expanding collection of colorful action figures. This 20-year-old movie was for them, and is essentially a 95-minute-long episode. 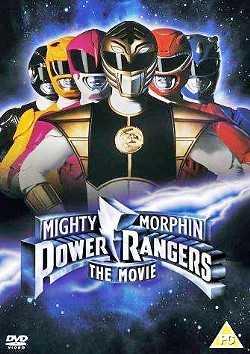 The plot pretty much follows the familiar pattern of the television show: The six teenagers are busy doing cool teen stuff when, surprise, a big bad villain shows up to ruin their fun and threaten their city with total destruction. In this case, the movie introduced a new villain, a slimy, shape-shifting purple baddie named Ivan Ooze (Paul Freeman of Raiders of the Lost Ark fame). Ooze hatches out of an egg at a construction site, then goes about trashing the Power Rangers' hideout and injuring their inter-dimensional mentor, Zordon. The rangers are on their own as they try to stop Ooze from taking over the city. After several choreographed fight scenes, they save the day by fighting some poorly computer-animated monsters and their equally poorly animated robots called "zords." Spoiler alert: The rangers end up saving the day and all is well.

While the movie isn't good, it does deliver on being one of the most 1990s movies that ever '90'ed. The movie opens with the group of super cool Power Rangers skydiving to a Red Hot Chili Peppers song, a scene that pretty much sums up all of my impressions of that time period as a 10-year-old kid.

Despite being pretty terrible, the movie was considered a box office success at the time, raking in $66.4 million and costing just $15 million to make. The movie was successful because it knew its audience and gave them exactly what they wanted. Now, 20 years later, those same kids are adults, and once again, the filmmakers behind the Power Rangers reboot are giving them what they want: a more mature version of what they loved as kids. While the new version cost $110 million to make, it pulled in about $40 million when it opened at the end of March, so it remains to be seen whether the Power Rangers will pull it off again. (95 min.)