Blast from the Past: Napoleon Dynamite

With so many Americans feeling disheartened about the current election, now seemed like a good time to look back on an era where we all had a candidate we could believe in—one who would make our wildest dreams come true. Or maybe I just got nostalgic because I saw a guy in the 99 Cents Store sporting a “Vote for Pedro” shirt the other day. Either way, Napoleon Dynamite is definitely a movie worth revisiting.

The plot follows the title character (Jon Heder) trying to navigate the nuances of high school life, particularly bullies, all while dealing with his absurdly dysfunctional family and his status as a quirky outcast. He eventually befriends Pedro Sanchez (Efren Ramirez), who decides to run for class president against the most popular girl in school, Summer Wheatley (Haylie Duff). While this may sound like the synopsis of dozens of other teen movies you’ve seen, Napoleon Dynamite’s execution makes it anything but. 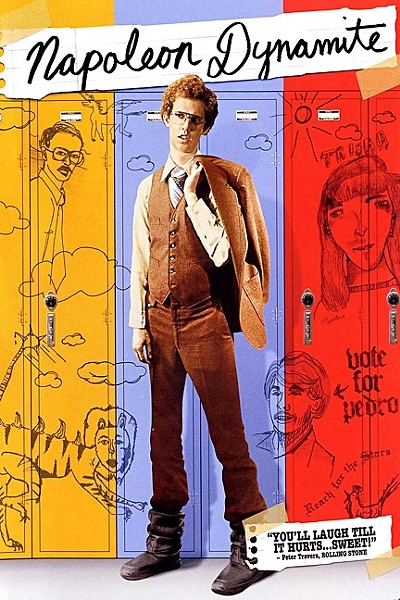 The movie gained a cult following after its release, namely because of the plethora of quotable moments it provides. Everyone remembers Napoleon addressing the family pet llama as “Tina, you fat lard” or the boy who demands “Gimmee some of your tots!” upon noticing the tater tots Napoleon shoved in his pants pocket for secret in-class snacking. Watching it again after so many years, I was reminded how many of these moments the movie truly has, including some of the more underrated lines. My personal favorite was (and still is) Napoleon’s deadpan “yes” in response to an instructor in a dance video rhetorically asking “Are you ready to get your groove on?”

My main criticism of this movie is how ambiguous the timeline appears to be. According to the opening credits, which feature Napoleon’s student ID, it supposedly takes place during the 2004-2005 school year. However, the fashion choices and technology shown throughout imply anywhere between the 1970s and 1990s, and the soundtrack feels similarly dated. It’s difficult to believe that the story takes place in the mid 2000s when the characters are surrounded by VHS tapes and side ponytails, with not a single flip phone in sight. Although, now that the movie is more than a decade old, this ambiguity also comes off as a strength, giving it a timeless, ever-relatable feel.

Some criticize Napoleon Dynamite’s abrupt, montage-style, happily-ever-after-for-all ending, saying that it comes too easily. I disagree; the strange but well-intentioned characters have endured enough torment, and no matter how many times you watch it, there is always something heartwarming, inspiring, and immensely satisfying about seeing them all overcome their hurdles one by one. And of course, President Pedro has to keep his campaign promise to make everyone’s wildest dreams come true.

If you didn’t jump on the bandwagon back when it was popular, give this indie flick a chance now. (And don’t forget to keep watching after the credits!) Napoleon Dynamite isn’t just a movie—it’s an experience. It’s a pop culture phenomenon. And it’s flippin’ sweet. (96 minutes.)