Blast from the Past: Office Space 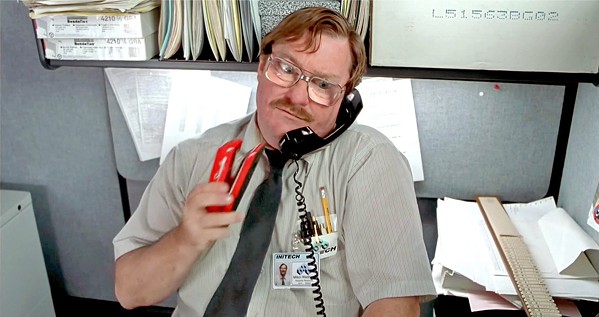 What do Fight Club, American Beauty, and Office Space have in common? Well, they all came out the same year, 1999. The main character in Fight Club is a white male discontent with a white-collar job—oh wait, all three movies are about that guy! But don't worry, Kevin Spacey only plays one of them.

I don't know what it was about '99 that made it the year of disgruntled office workers ready to wage war on their respective corporations and consumerism at large, or what made '98 the year of animated insects—how dare A Bug's Life and Antz get released within three months of each other!

What I do know is the best of the three was written and directed by the creator of Beavis and Butthead, King of the Hill, and Silicon Valley. Mike Judge, who also directed Idiocracy and Extract, helmed Office Space and also stars in the film as Stan, the manager of Chotchkie's. It's a restaurant our primary protagonist Peter (Ron Livingston) and two of his co-workers, Michael (David Herman) and Samir (Ajay Naidu), frequent just for coffee, despite persistent recommendations from their least favorite waiter, Brian (Todd Duffey)—"Maybe something to nibble on? Some pizza shooters, shrimp poppers, or extreme fajitas?!"

"OK. Sounds like a case of the Mondays," Brian guffaws.

It doesn't really matter whether it's a case of the Mondays or not though, because Office Space is hilarious any day of the week. The plot is mildly interesting—guy who hates his job gets hypnotized into not caring about anything anymore—but it's the characters and endlessly quotable dialogue that make it worth infinite repeat viewings.

There are just so many intricacies to each performance and the way these characters are written. Bill Lumbergh (Gary Cole), Peter's boss at Initech, has been immortalized through countless memes, and deservedly so. The two Bobs, Bob Slydell (John C. McGinley) and Bob Porter (Paul Wilson), the pair of consultants brought in to help downsize the company, are the most intimidating squares I think I've ever seen on screen. Their interviews with the employees of Initech make for some of the best moments in the film ("What would you say you do here?"). Joanna (Jennifer Aniston), a Chotchkie's waitress Peter starts dating, is perfectly humble, down to earth, and defined by her hatred of wearing "pieces of flair"—pop culture-themed buttons and pins required to adorn her work uniform.

And of course, there's Milton Waddams (Stephen Root). Like Bill, you've probably seen Milton even if you haven't seen the film, as he, along with his signature red Swingline stapler, is often the subject of memes. The stapler was actually customized for the film, as there was no such red-colored stapler offered by Swingline. That of course changed due to the film's success, and oodles of custom orders for red staplers from fans followed. (90 min.) Δ