Blast from the Past: Oldboy

If someone ruined your life, and I mean ruined it, what's the worst form of retaliation you can think of? Say this person broke your heart, publicly embarrassed you, stole your money and dignity, killed your child—whatever it may be—what's the most horrible, awful, painful plan you can drum up to get even? The strategy for vengeance you'd fantasize about night after sleepless night? 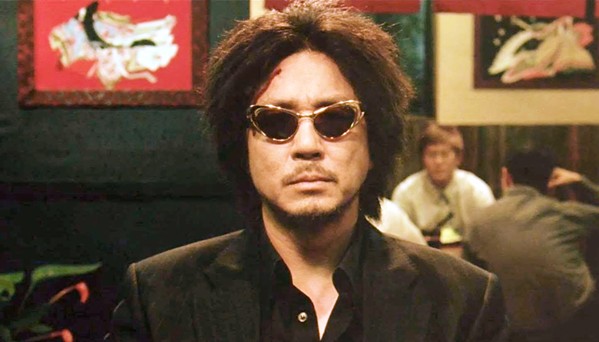 Whatever your worst is, I guarantee it's not half as shockingly cruel and unusual as the story of revenge that plays out in Oldboy. In this South Korean action-thriller, known originally as Oldeuboi, director and co-writer Chan-wook Park (Sympathy for Mr. Vengeance, The Handmaiden) shows us just how disturbing and somehow still unsatisfactory getting payback can be.

The plot hinges on the beaten path of Dae-su Oh (Min-sik Choi), a typical businessman who is suddenly abducted on the night of his daughter's fourth birthday. Dae-su is taken to a strange, illicit prison, where his cell is reminiscent of a windowless hotel room. He's left with nothing more than a bed, a bathroom, and a TV, and that's where he stays for 15 years, all the while unsure of who has imprisoned him and why.

Television is Dae-su's only source of entertainment and connection to the outside world throughout his kidnapping, and on the news one day he sees that his wife was murdered, his daughter is missing, and he's the suspected killer. Eventually he begins to dig his way out through the wall of his room, but just before he breaks through to the outdoors, he's hypnotized by a mysterious woman and then wakes up on a rooftop dressed in a suit.

It's 2003, the first time he's seen sunlight since 1988, but Dae-su wastes little time. Instantly, he's on a fervid hunt for his captor, for whom he has vicious plans. He also begins the search for his long-lost daughter, who he discovers was put up for adoption shortly after his wife was killed.

But it soon becomes apparent that Dae-su's captor, a man named Woo-jin Lee, is several steps ahead, and is somehow always watching. Dae-su's only consolation is Mi-do, a young sushi chef he quickly falls in love with who helps him search for his daughter and fight his tormentor.

It's impossible to really write about this movie without giving away all the big twists and turns and shockers, but I will say that Mi-do—though sweet, helpful, and loving—is not what she seems. And although Dae-su is seeking a little quid pro quo for the murder of his wife, the loss of his daughter, and his 15-year imprisonment, it's really his captor, Woo-jin, who is seeking revenge, and he gets it not through gory torture, but through mental and emotional anguish. Years of imprisonment turns out to be the least of Dae-su's worries.

Why? You'll have to watch to find out. Δ