Blast from the Past: Orange County 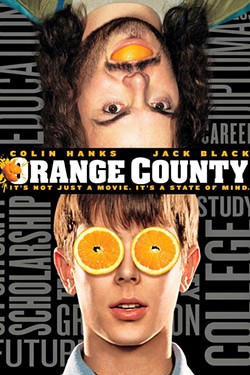 Where's it available? Streaming on HBO

Believe it or not, this quirky MTV Films comedy about an aspiring writer, Shaun Brumder (Colin Hanks), trying to get into Stanford to escape his dysfunctional Orange County family was the defining movie of my childhood.

While it had a low-key release and is less known to the masses, my friends and I walked around in middle school on a daily basis gleefully reciting lines from Orange County. But you don't have to be a 12-year-old to enjoy it. There are so many hilarious lines and characters, and it's a true coming-of-age tale—but in a subversive, non-corny way.

A beach bum and surfer, Shaun Brumder was just another apathetic Orange County teen until he picked up a novel lying in the sand by Marcus Skinner, a fictional author and Stanford University faculty member. The book changed his life and planted a dream to go to Stanford to study creative writing. But Shaun's family—his manic and alcoholic mother, Cindy (Catherine O'Hara), selfish and workaholic father, Bud (John Lithgow), and deadbeat stoned brother, Lance (Jack Black)—don't understand his vision and they inadvertently sabotage his efforts at seemingly every turn.

Praying that Stanford can be his ticket out of this misery, Shaun gets rejected from the school because his aloof college counselor (an amazing cameo appearance by Lily Tomlin) sent Stanford the wrong transcript. Beside himself and fearing he'll be forever tied down by his family's insanity, Shaun makes a road trip north to the campus in an attempt to meet with the dean of admissions and learns some unexpected life lessons along the way.

Written by Mike White (School of Rock, Enlightened), Orange County is a great and hilarious movie not in the least for the typical teen flick silliness it provides. There's a deeper humor not found in comparable movies, one that's based on the realness of the characters, their imperfections, and how Shaun navigates it all. White does that while also weaving together scene after scene, social disaster after social disaster that make you laugh 'til you cry—I did, at least.

I recently watched the movie again with my cousin when he visited for the first time in years. We started re-enacting the scenes all over again. It's worth a watch, if you haven't had the pleasure. (81 min.) Δ