Blast from the Past: Raiders of the Lost Ark 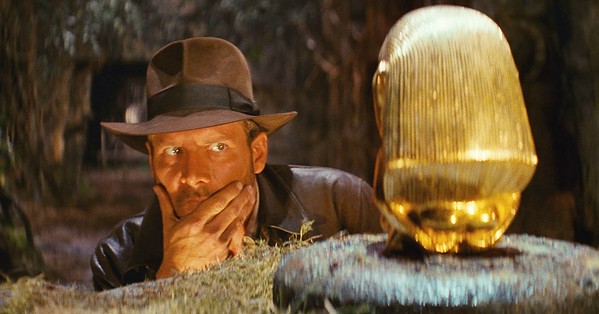 Nearly 40 years after its release, the opening sequence of Raiders of the Lost Ark is still as delightfully amazing as it ever was: A chiseled Indiana Jones (Harrison Ford) literally whipping a pistol out of a dude's hand. Alfred Molina (our very own 2019 SLO Film Fest honoree) guiding Indy through a booby-trapped temple before stealing the golden idol and meeting his own demise. Indy out-running the most iconic boulder in cinematic history and diving into a moving seaplane as arrows are launched his way.

It is, without a doubt, one of the best openers in any movie ever, in one of the most storied films of all time. Helmed by George Lucas and Steven Spielberg, the first installment in the Indiana Jones franchise left an indelible mark on Hollywood and culture, and set the stage for many an action-adventure flick and hero to come.

Set in 1936, the film's daring archaeologist is Jones, who without his fedora, bullwhip, and satchel is just another university professor in Connecticut. One day he's paid a visit by two government officials, who fear the Nazis are in search of an ancient Egyptian staff that can be used to locate the Ark of the Covenant, an artifact with supposed powers of invincibility. Jones is asked to embark on a trip across the world to retrieve the ark before the Nazis can. In route, he links up with a former lover, Marion Ravenwood (Karen Allen), the daughter of a dead colleague; and a friend and digger, Sallah (John Rhys-Davies). The Nazis are led by their own archaeologist, Rene Belloq (Paul Freeman), and military official, Major Arnold Toht (a frightening Ronald Lacey), whose hunt for the ark parallels Jones'.

With a swift pace, fantastic effects (for the era), and a touch of comedy, Raiders takes you on a wild ride that thrills, scares, spooks, endears, and makes you laugh. Ford as Jones makes for a superhero match that I don't know has been equaled in Hollywood since. Unflappably cool (except when snakes are involved), Indy evades death like he's swatting flies, in a hilariously dry manner. We'll watch this character do just about anything, but Lucas and Spielberg take Raiders to the next level with an original, interesting plot; impeccably done fight sequences; and visually stunning environments. The film was shot in San Francisco, Hawaii, France, and Tunisia, and its global atmosphere greatly enhances Raiders' legacy, in my opinion.

With Hollywood continuing to push the envelope in the superhero genre—i.e., high-budget, DC Universe and Marvel Studio movies—I recommend taking a trip down memory lane to reconnect with some of our older superheroes. In some ways, the genre's made a lot of leaps; in others, there's still much to be learned from the past. (115 mins.) ∆