Blast from the Past: Rikki-Tikki-Tavi

The 1975 animated film Rikki-Tikki-Tavi, along with The White Seal and Mowgli's Brothers, is one of three animated films based on short stories in Rudyard Kipling's The Jungle Book, adapted for television by cartoonist Chuck Jones. Jones' work includes classic Warner Bros. shorts featuring familiar characters like the Road Runner and Wile E Coyote, episodes of MGM's Tom and Jerry, and the TV adaptation of Dr. Suess's How the Grinch Stole Christmas, plus he took home three Oscars for The Dot and the Line, For Scent-imental Reasons, and So Much for So Little.

In Rikki-Tikki-Tavi, Jones finds himself in a darker place with characters more realistically drawn than in much of his previous work. An ominous narration by Orson Welles, who also voices the characters Nag and Chuchundra, backs the film. It opens with a thunderstorm in the jungle, which flashes black and white every time lightning strikes, and a mongoose named Rikki-Tikki-Tavi is struggling to stay above water in a raging river. An unconscious Rikki is later found by a boy named Teddy, whose family takes him in and gets him back on his feet. Rikki stays with the family and is faced with the challenge of returning the favor when two cobras plot to kill them.

Though it is set in an earlier time period, the style of the animation and the of-the-era fight scene/car chase music gives Rikki-Tikki-Tavi a look and feel of the period in which it was made, which works quite well with the story. Who doesn't want to see an animated mongoose battle with a cobra to a groovy, '70s horn-based tune? There's also a memorable song sung by the tailorbird character that makes you want to sing along, which offers a nice contrast to the darker elements of the film. 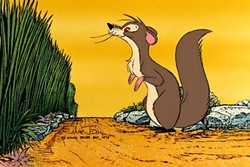 The characters in Rikki-Tikki-Tavi are distinctive in their mannerisms, their voices, their personalities, each making their own individual mark on the overall character of the movie. There's Chuchundra the cowardly, worrisome muskrat; Darzee the overly exuberant tailorbird; the sinister husband and wife cobra pair, Nag and Nagaina; Teddy and his family; and, of course, the loyal and fearless Rikki-Tikki-Tavi.

Having not read the original story on which it is based, I can't say how this film compares, or how true it is to its predecessor, but I can say that I think this is a perfectly executed film. I enjoyed watching it many times as a kid, I've seen it multiple times as an adult, and it is a worthy addition to any film collection, animated or otherwise. (30 min.)