Blast from the Past: Robocop 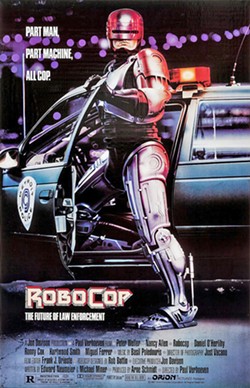 He shoots rapists in the groin with super-computer targeting, hurls burglars into egg cartons, and walks through gas stations engulfed in flames.

He's RoboCop, your friendly neighborhood metaphor cautioning against the corporatization of government.

RoboCop is also one of the coolest films of the '80s, brimming with sharp satire and a layer of nuance left out of the action films of today. The film is part dystopian portrait, but, more significantly, it treads precisely the line between action and well-honed satirical observations. RoboCop doesn't so much take itself seriously as it delivers the lighter moments—always in newscasts or TV ads—in deadpan fashion.

It deftly uses the newscasts, complete with accurately cheesy and rigid banter between anchors, to set atmosphere and the rules in which these characters operate.

The world is a brutal one where foreign nations are locked in revolution. Detroit is as well, but instead of a revolution of arms, it's a struggle between corporate titan Omnicorp and the city of Detroit.

The darkest moment of the film is the creation of RoboCop. When officer Alex Murphy is brutally gunned down by a murderous gang, soulless corporate entity Omnicorp swoops in to transform him into a law-enforcement cyborg.

The company has entered into a contract with the city to run the police department. The center of that plan is a giant, bipedal robot, ED-209, equipped with all kinds of high-caliber firepower. Early in the film it malfunctions and kills an executive in a boardroom demonstration. The prevailing sentiment of the characters over the death is one of annoyance rather than guilt or any other normal human reaction.

The main villain and program manager of the robot, Dick Jones, played by Ronny Cox, is the embodiment of corporate greed.

Once his project is bumped off in favor of RoboCop, he delivers the most tragicomic line of the whole film: "I had a guaranteed military sale with ED-209—renovation program, spare parts for 25 years. ... Who cares if it worked or not?"

The line hits almost too close to home, mirroring the tragic story of the M-16 in Vietnam, a weapon military leaders knew would fail. The rifle was meant to be an improvement on the previous M-14 model, but instead was dangerously unreliable.

RoboCop is timeless in part because the entanglement it describes accurately tracks bureaucratic missteps that have happened before and after the film came out.

The film, sadly, is probably part of a dead era of brainy action films that use a touch of camp to lighten heavy messages. Starship Troopers fits the mold too, appearing at first to be a dumb alien movie, but also delivering insights into the dangers of blind allegiance.

Another perk of these films, and RoboCop in particular, is that they don't have to be analyzed to be enjoyed. The movie is loaded with action but not dragged down by it. The production value is top-of-the-line for its time, and the run time avoids bloating by finishing at 1 hour and 43 minutes.

RoboCop is inherently tied to the idea that a corporation can bind itself inextricably to our lives. After all, even in death, Murphy is possessed by Omincorp. The message is even more cynical than Benjamin Franklin's death and taxes quotation. In RoboCop, even after death, something is still owed. (103 min.) Δ