Blast from the Past: Scarface

Where's it available? DVD and Blu-ray, On Demand

There are so many lines from Scarface I could quote directly from memory that I almost don't even need to actually watch the film. But I did anyway because like many slowly aging people of my generation, I find myself more and more drawn to re-watching things I have seen a billion times rather than taking on the exhausting burden of watching something brand new. The fuddy-duddy in me likes familiarity, thank you very much. But beyond that, Scarface is just a masterpiece. 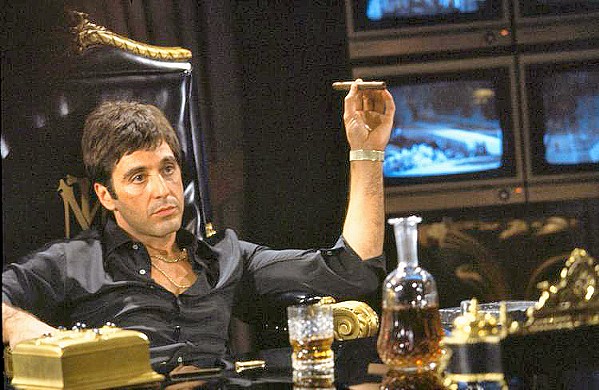 Scarface, directed by Brian DePalma and written by Oliver Stone, features some of the most classic moments in cinematic history. Be it Al Pacino's epic showdown with a competing drug cartel at the end, the infamously terrifying chainsaw scene, or the still jaw-dropping moment when the audience first gazes upon Michelle Pfeiffer slowly descending like an angel from heaven in the glass elevator wearing that dress. (I still have nightmares about all the times I tried to give myself her perfect bob haircut.)

In examining classic films that made such a cultural impact, it's important to look at how well they've aged. Does Scarface hold up in 2018, in an environment where representation matters so very much? It depends on how you look at it. It's hard to look past so many Caucasian actors playing people of color. (You mean to tell me in 1983 you couldn't find more than a handful of Cuban or Hispanic/Latino actors?) Frankly, Robert Loggia (who was a brilliant and wonderful actor I greatly admired) laying on a thick accent comes across as corny. The effect is somewhat comical, honestly. But at the time, this wasn't recognized as the act of whitewashing we now see it as. Actors considered it a great challenge to transform themselves into characters of different races or ethnicities, and Hollywood didn't leave much room for diversity behind and in front of the camera.

With that aside, the movie holds up astoundingly well. Pacino is nothing short of magnetic. In that all-too-real chainsaw scene, De Palma's choice to let the camera hang on Tony Montana's face is pure perfection. We are never told, but we know Tony has seen similar acts of violence, so much so that his soul is nothing more than a black pit he desperately seeks to fill with money and power. Even when he has all these things, Pacino sells the emptiness of Tony so well, the trappings of his success become almost garish and hard to look at. Except that sunken hot tub in the middle of his bedroom. (Seriously, people did this back then? Didn't water just get all over your bedroom carpet? Did no one worry about mold in the carpet? Am I the only who thinks about these things when I watch movies?) (170 min). Δ