Blast from the Past: Scream 3 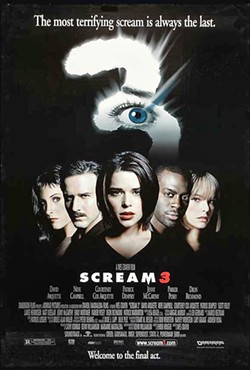 Scream 3 leaves the setting of the previous two films for the glitz and glamor of Hollywood, where the third film in a string of horror films based on the original Scream murders, Stab 3, is currently in production. When members of the cast and crew begin turning up brutally murdered, it's up to Prescott, who's been in hiding, to re-emerge and stop Ghost Face's killing spree.

Joining Prescott are several familiar characters from the last two entries in the franchise, including bumbling ex-cop Dewey (David Arquette) and news reporter Gale Weathers (Courtney Cox). Joining them is a murderer's row of popular '90s actors including Patrick Dempsey, Jenny McCarthy, and Parker Posey, many of them playing actors playing the roles of the other main characters in the films within the film. Not only are they tasked with unmasking the killer (who in true Scream fashion is never revealed until the final scenes of the film), but they must also solve a mystery at the heart of the murders, which seems to be connected to Sidney's mother, who was killed in the first film.

Like the original Scream, Craven uses the plot of Scream 3 as a meta commentary on horror movies: in this case, horror sequels. Much of the dialogue, jokes, and plot points are based on the fact that most long-running horror franchises become less scary, more cheesy, and frankly, worse with each new film. As the creator of the iconic Freddy Kruger of the Nightmare on Elm Street films, the late Craven knew this better than most.

Like 1994's New Nightmare, Craven chose to openly acknowledge and embrace this, and tried to turn to the tired tropes of horror sequels instead of covering them up. It works well, and makes the third entry in a horror franchise, which probably didn't need two other movies, watchable and interesting.

Even if you don't like horror, the film is worth a watch for anyone looking, for god-knows-what reasons, to relive the pop culture of the late 1990s or early 2000s. In addition to the cast, the movie even includes a cameo by Clerks characters Jay and Silent Bob (Jayson Mewes and Kevin Smith), and a soundtrack packed with cheesy early aughts nu-metal bands like Sevendust, Slipknot, and Finger Eleven.

While New Nightmare does much of what Scream 3 does far more effectively, this movie is still worth a watch as a not-so-sly wink and a nod to the silly lengths Hollywood is willing to push a popular horror film into endless iterations. (116 min.) Δ