Blast from the Past: Strange Days

While it’s not a genre you hear talked about all that much, gritty science fiction noir has been around long enough to cultivate its own fairly robust lineage in film.

Catapulted into movie nerds’ consciousness by the seminal 1982 film Blade Runner, these movies usually take place in a dark near-future where technological advancements haven’t been used to make the world a better place, but have been twisted to cater to humanity’s darkest desires and vices.

The 1990s saw a spate of such films, stuff like Dark City, Johnny Mnemonic, and Virtuosity, eventually leading up to 1999’s blockbuster smash The Matrix. Theses film were all created and released at a time when society was on the cusp of the internet age; when the applications of new technology seemed endless, and before that possibly was crunched down, disappointingly, into the smartphones we now spend endless hours on.

One of the most overlooked films of the genre is Strange Days. Released in 1995, at the height of gritty near-future science fiction films, the story follows Lenny Nero (Ralph Fines) sleazy ex-cop turned dealer of black market SQUID, a virtually reality like device that allows users to see, hear, and feel experiences of others. Those experiences can include something as innocent as running on the beach to robbing a liquor store or worse. Set in a chaotic “future” Los Angeles on New Year’s Eve just before the year 2002, Lenny, along with a gang of down and out friends, go to unravel a conspiracy involved with the politically charged death of a rapper at the hands of the LAPD. 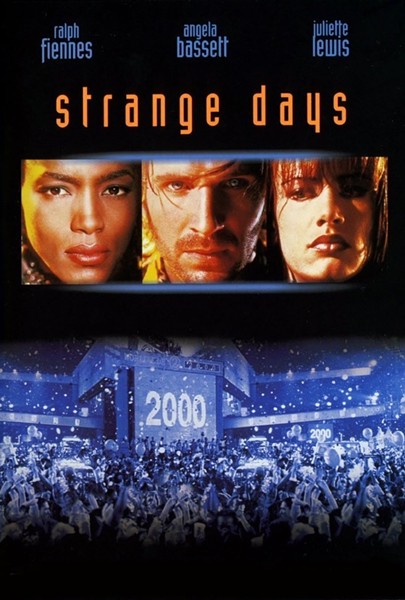 The movie is intense, violent, and along with a pretty stellar cast that includes Angela Bassett, Juliette Lewis, and Tom Sizemore, really brings to life the world of the film, which was influenced by political and special turbulence in the 1990s like the Rodney King beating and the Los Angeles riots. The film was written by James Cameron and directed by Kathryn Bigelow, who later went on direct the academy award-winning Hurt Locker in 2009.

But despite good casting and strong writing and directing pedigree, the movie was a commercial flop. Maybe the politics and social commentary was too on the nose at time. Maybe there were just too many similar films out at the time (Johnny Mnemonic and Virtuosity were also released in 1995), and people just got tired of being told their future was going to be bleak, impersonal, and unstable.

But today the film seems more prescient than ever. There’s still tensions and turmoil over politics, race, and police violence, and while the SQUID technology seemed far off in 1995, today there are already several companies mass-producing small virtual reality headsets for consumers to use in their own homes. While it didn’t get everything right about our future, Strange Days sets a haunting mood that, in the present, is resonant and all-too familiar. (145 min.)