Blast from the Past: Stranger than Paradise

In his first feature out of film school, writer-director Jim Jarmusch delivers a nearly plotless three-act deadpan comedy about Willie (avant-garde jazz musician John Lurie), a New York hipster who finds himself saddled with a surprise visit from his 16-year-old cousin Eva (Hungarian actress Eszter Balint) after his Aunt Lotte (Cecilia Stark) must go to the hospital. Willie makes it clear he’s not happy to be stuck with her in his dingy Lower Eastside apartment, but she eventually grows on him. Willie and his friend Eddie (former Sonic Youth drummer turned actor Richard Edson) are both sad to see her go when she finally leaves New York to stay with Aunt Lotte in Cleveland. 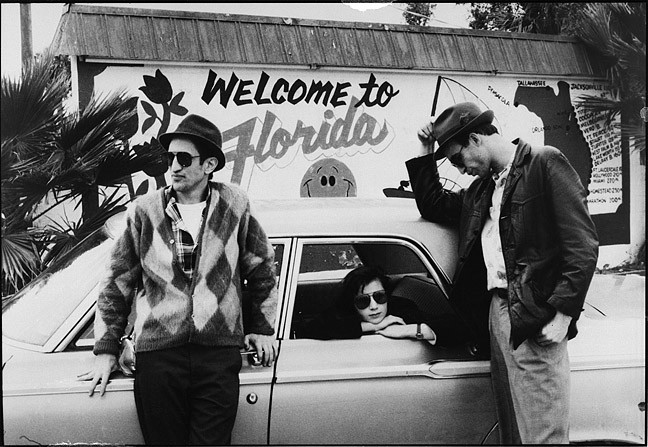 In act two, set a year later, after cheating at a card game, Willie and Eddie decide take their winnings and visit Eva and Aunt Lotte, so they head to Cleveland where they latch onto Eva and interfere with her movie date with a coworker, play cards with Aunt Lotte, and complain about the weather. In the final act, as they’re driving back to New York, Willie and Eddie decide to “rescue” Eva, so they return to Cleveland, pick her up, and all three head to Florida, where the boys lose all their money on the dog races. Determined to win it back, they go to the horse races while Eva walks on the beach and is mistaken for a drug dealer and given a bunch of money. She returns to the motel, leaves the boys a note, and decides to return to Europe, but when she discovers the only flight that evening is into her native Hungary, she turns around. Meanwhile, the boys have recouped their losses at the dog races, return to the hotel, read Eva’s note, and race to the airport, where Willie buys the last seat on the plane bound for Hungary without realizing Eva is still in America.

The film is now considered a masterwork of independent, low budget filmmaking. Made for just $90,000 and shot on leftover film stock gifted to Jarmusch by auteur Wim Wenders, it’s a true a cult classic. Each shot in the film is a continuous take separated by a brief fade to black, the film was scored by Lurie and the soundtrack is played by a classical quartet, and Screamin’ Jay Hawkins’ classic song “I Put a Spell on You” is featured throughout.

On a side note, after the film made a profit and after Jarmusch discovered the money he paid for the rights to Hawkins’ song all went to the record company, Jarmusch tracked Hawkins down, found him living in a trailer park, and gave him some money.

This groundbreaking absurdist, minimalist film is must-see viewing for any serious film fan, and it made Jarmusch an instant star of the film underground. (89 min.; B&W 1984).