Blast from the Past: The Great Escape 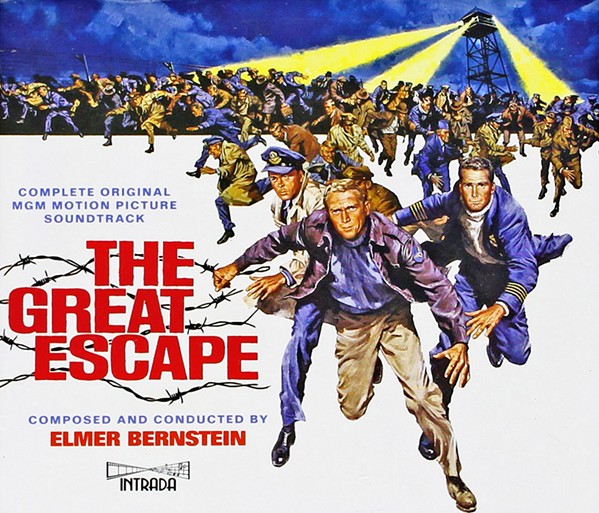 The searchlights are roaming and the POWs are plotting in the historically based World War II action film The Great Escape, starring blockbuster stars of the 1960s. Steve McQueen, James Garner, Richard Attenborough, and Charles Bronson play the (mostly) historical characters who dare to defy their Nazi captors and work fastidiously together to escape.

The film is based on the book of the same name by Paul Brickhill, who related his firsthand account in Stalag Luft III, a POW camp specifically for British airmen. In some ways the film is incredibly accurate to history, down to the layout of the camp itself. In other ways it's not, like the presence of Americans in the camp. McQueen and Garner are two of those Americans, Hilts "The Cooler King" and Hendley "The Scrounger." The airmen were thrown into a camp that was specifically designed to hold the POWs with a history of escape attempts.

The camp was designed to be inescapable, Luftwaffe Col. von Luger (Hannes Messemer) explains to Bartlett "Big X" (Attenborough), the squadron leader for the British Royal Air Force, in the terse preamble to the film. The seriousness of the stakes is clear—this camp will be strict, and escape attempts won't be tolerated.

Of course that's exactly what Bartlett wants to do, and he quickly decides to get his men out. He wants to achieve a massive breakout—more than 200 men! They start working three tunnels that they call Tom, Dick, and Harry so as not to arouse suspicion. But digging isn't the only job to do.

Everybody gets a cool nickname in The Great Escape because they all have talents that become vitally important to their plot. Garner is "The Scrounger" because he's able to attain useful things. Bronson is fantastic as the "Tunnel King," who develops a serious fear after a tunnel collapse buries him. Another familiar face is James Coburn as Sedgwick, the "Manufacturer," who leads a workshop building tools.

The film takes serious care to show the amount of work that went into a breakout of that magnitude. At two hours and 52 minutes, The Great Escape takes its time to build up. The escape doesn't begin until after the first hour, and that's when it starts to feel like a faster paced action flick.

The length of the film allows for so much depth, illustrating subtle beefs between Nazi Luftwaffe and the Gestapo or the painful means POWs went to in order to keep their plans a secret. And once the escape is on, the Austrian countryside and the Alps serve as a stunning backdrop to McQueen's iconic motorcycle chase scene, which was written specifically for him due to his love of motorcycling. It, of course, isn't true to history. But true to history, not many of the escapees fare well, so this movie might not be appropriate for kids younger than 13 or so.

The Great Escape has really come to epitomize the genre of movies about prison breaks or daring escapes from a brutal oppressor. The hilarious sendup by Aardman Animations, Chicken Run (2000), was an homage that really illustrated how ingrained the film is in pop culture. From the barbed wire and searchlights to the earworm score by Elmer Bernstein, there's plenty worth revisiting in this long running but slow burning classic.