Blast from the Past: The Matrix

I have something I must confess: I had never seen The Matrix in its entirety, until recently. Granted, when the film came out in 1999, I was only 7. The Matrix is set in the same year. 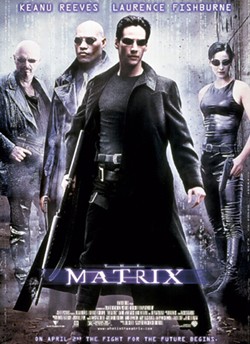 Thomas Anderson (Keanu Reeves) holds down your average desk job, but he also has a side gig of computer hacking and goes by the name Neo. Something about Neo's metropolitan city doesn't sit well with him, and during his hacking escapades, he repeatedly runs into the cryptic phrase "the Matrix."

He's mysteriously contacted by Trinity (Carrie-Anne Moss), who tells him a man named Morpheus can explain the meaning of the message.

Of course, Neo's curiosity is piqued, and he meets up with the dude. Morpheus then gives his famous spiel about taking the blue pill and essentially conforming with what society tells you or take the red pill to see the truth behind the Matrix.

Duh, Neo downs the red pill and awakens inside a liquid-filled pod next to countless other humans who are connected by cables to an electrical system. Yup, it happened, people! Machines are taking human's bioelectric energy and, in turn, putting them in a simulation made to feel like they're living in 1999 when in reality it's 2199.

Morepheus believes Neo is "the one" that will unplug mankind and restore the people to physical and psychological freedom.

Let me pause for a second here. Morpheus, if you didn't already know, was the son of Hypnos, which is where hypnosis comes from. It's said that to be in the arms of Morpheus is to be asleep. What if this is all a dream?

Jokes aside, while this film broke the boundaries of 360-degree filming—not to mention a mind-binding plot—the acting is a cry for help. Maybe the characters are meant to have no feeling when they interact. I mean, I would be salty too if machines were controlling my reality.

I can't help but laugh at Reeves' dry performance, and the script overall. But I enjoyed the idea of having the ability to control your mind, walk on walls, and ninja-kick the crap out of people.

For the end of the '90s, the film was definitely ahead of its time with the action-packed graphics. In my opinion, the script and the predictability of the story was laughable. It did leave me with a ton of questions: What happens to the people who are saved from the energy sucking machines? What do they do? How can they take down the machines? I guess if I realize that I'm living in another reality and I can bend a spoon with my mind, then I can just will myself to ninja-kick the crap out of a machine! Or I could watch The Matrix Reloaded and The Matrix Revolutions. Δ