Blast from the Past: The Prestige

Reading Zac Ezzone's column on Magic For Humans last week inspired me to keep up the illusionist thread and revisit one of my all-time favorite psychological thrillers, 2006's The Prestige, aka "Magic For Humans Who Like Christopher Nolan Movies." Like many of his films, Nolan uses a non-linear story structure—jumping back and forth between the past and present, sometimes indistinguishably and, as I've heard from opposing opinions, at the expense of the viewer. 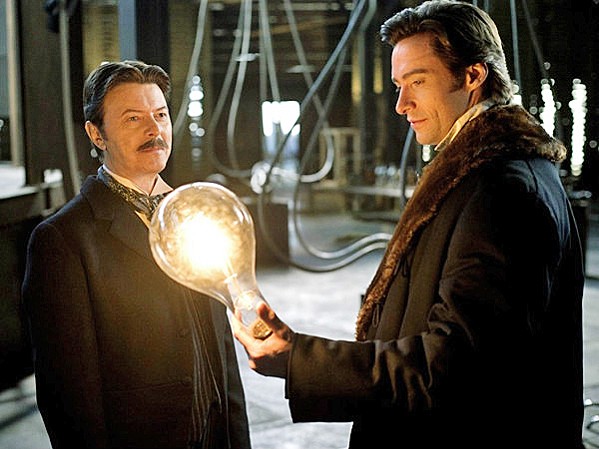 Having seen the film many more times than once, I can't recall how much of The Prestige's puzzle I was able to piece together during my first viewing. But what I do remember about seeing it for the first time was being intrigued all the way through, thanks to its increasingly foreboding atmosphere, even if I couldn't tell what the hell was going on. It demands repeat viewings, and, in my opinion, deserves them.

The plot follows two rival magicians in 1890s London, Robert Angier (Hugh Jackman) and Alfred Borden (Christian Bale). Imagine the venomous relationship between Salieri and Mozart in Amadeus, but pitted between two men trying to pull rabbits from their top hats. Surprisingly, said trick isn't depicted in the film (Nolan trying to avoid cliché tropes, no doubt), and neither do the men try to saw any women in half. Sure, they accidentally drown one during a freak "escape the water tank" mishap, but not a single handsaw in sight.

This horrifying incident serves as the initial spark of hatred between the two men. The film opens with youthful versions of Angier and Borden working as assistants to the same magician. Angier's wife, Julia (Piper Perabo), worked alongside them, and was the woman who tragically died during the tank trick. Convinced that Borden tied too strong of a knot around Julia's wrists, allegedly preventing her from escaping the tank, Angier becomes obsessed with revenge.

As the two men go their separate ways to pursue becoming magicians themselves, Angier never lets go of his obsession. What unravels is a back-and-forth struggle between the two, as both men strive to either outdo the other or sabotage each other's tricks entirely. Borden becomes just as bitter toward Angier as the conflict grows more and more hazardous to both men's lives.

Taut atmosphere and powerful direction aside, what keeps the train moving is Jackman and Bale, who were perfectly cast, as if they were destined to play rival magicians—who wouldn't want to see Wolverine vs. Batman? There's also a great analogy between their feud and the historical struggle between competing inventors Thomas Edison and Nikola Tesla. Tesla appears in the film as a supporting character, played fantastically by David Bowie. I won't give away Tesla's (the man, not the car) involvement with the plot, but I will say that top hats are involved—just no rabbits. (135 min.) Δ