Blast from the Past: The White Seal

Based on a story from Rudyard Kipling’s The Jungle Book, The White Seal is a 24-minute short by animator Chuck Jones, which originally aired on CBS in 1975. Narrated by Roddy McDowell, the film tells the story of Kotick the seal (McDowell), who, unlike any of his fellow seals on the beaches, has a coat that is ghost white.

Kotick is born to a cantankerous, alpha male father named Sea Catch (McDowell) and a loving mother named Mackah (June Foray) on the island of St. Paul in Nova Scotia. Mackah teaches Kotick to swim, to hunt, and to beware their enemies, like the club-bearing men who come to their island every year. While Sea Catch sees the hunt as a fact of life that the seals must endure, Kotick dreams of a place where the seals can be safe from mankind, and sets out on a journey to find it. 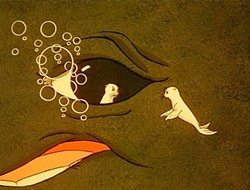 Like Rikki-Tikki-Tavi and Mowgli’s Brothers, the other two shorts Jones adapted from the The Jungle Book in the mid-’70s, The White Seal features more realistic animation than the classic Looney Tunes style that characterized his earlier work for Warner Bros. The seals face a harsh reality, and Jones doesn’t shy away from including dramatic, even somewhat scary moments in the film, which are made more dramatic by the realness of the characters.

At the same time, Jones stylizes some scenes with monochromatic color schemes that were often featured in art and design in the ’70s, and he doesn’t adhere to strict constraints concerning scale, with the whale character portrayed as having an eyeball that is larger than Kotki. For perspective, a blue whale’s eyes are about 6 inches in diameter.

Despite the dark nature of the subject matter, the film feels appropriately balanced with more humorous and joyous moments throughout. For instance, the musical montage of Kotki swimming blissfully in the sea, or when Kotki sets out to find a sea cow by looking for the only animal in the ocean that is more ugly than a walrus.

Along with his unique appearance, Kotki also has a unique vision for himself and the other seals. The White Seal ultimately becomes a tale about rejecting the status quo and setting out to discover a better life. (24 min.)