Blast from the Past: To Kill a Mockingbird

There I was, thinking I was being original, when almost every media outlet in America was doing the same thing: watching/writing/re-running a review of the 1962 film adaptation of Harper Lee’s book To Kill a Mockingbird in honor of the author’s recent death on Feb. 19.

While the likes of The Village Voice and The Hollywood Reporter basically re-published their respective 1962 reviews of the film— The Village Voice said “this is not much of a movie even by formal standards” while the Reporter said it was “one of the finest pictures of this or any other year”—New Times can only bring you an original! 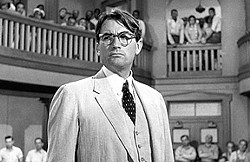 Because Atticus decided to take Tom’s case, we watch as the children are exposed to the racism—Southern style—that goes with it in a small Alabama town in the 1930s. A fellow student tells Jem his dad is a “nigger lover.” Scout beats up a classmate because of what he said about her father. They sneak out in the middle of the night and witness a mob surrounding Atticus, who’s standing guard outside Tom’s cell to ensure he doesn’t get lynched.

The acting felt a little removed at first, sort of more proper than it should be for the rural, poor Southern town being portrayed. The saving grace, for me, was Scout, a little scrapper who I connected with right away, a feisty, outspoken child with a heart of gold. The film opens with Mr. Cunningham (Crahan Denton) dropping off hickory nuts as payment for services from Atticus. And Scout runs to get her father, even though Mr. Cunningham asks her not to, saying she thought Atticus would want to thank him for the nuts.

Cunningham, of course, would rather bury himself in the ground—and after the scene, Atticus tells his daughter maybe she should just let it alone next time, because being in debt to someone else can be an embarrassing thing sometimes. It’s one of many life lessons the film hands out to its child protagonists, who are pretty fun to follow as they chase their whims all over town.

Tom’s trial is powerful—an homage to the inherent ridiculousness of even having a trial in the first place. The man was condemned the second he was accused, and although Atticus valiantly does his best to discredit the obvious lie, he is predictably unsuccessful. And although I’ve read the book, and seen the movie before, I was still hoping that the trial wouldn’t end the way it did. The film is a good reminder of how far we’ve come in the last 80 years.

I have this great love for historical portrayals of the brutality of this country’s racism—it’s so raw and revealing of a past we try to say is no longer a part of us. To remember that past and use it to educate ourselves about the future, reminding us of the work that still needs to be done, is always worth it. (129 minutes)