Blast from the Past ... Under Siege 2: Dark Territory

This isn't so much a movie review as it is a love letter to Steven Seagal. Let me start by saying that even though I love Seagal, the dude is not good at acting. Less than not good. Undoubtedly not good. He's got this weird confused look on his face all the time, like he's trying to access Netflix on a TV without internet connectivity. And his glistening forehead looks like he dipped it in rendered animal fat. 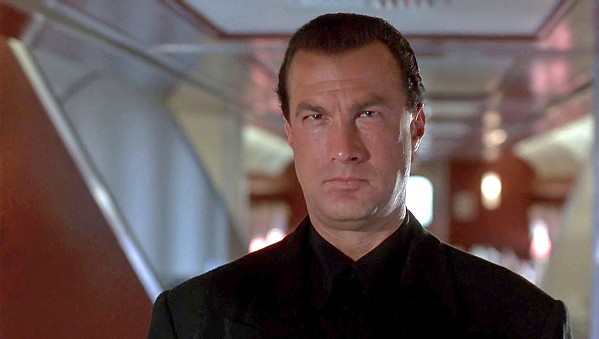 But I love the guy's movies because he is just a regular dude and definitely does not look good. This may not be a fact, but it's definitely "substantially true," if legal nomenclature is your thing. But really. He doesn't look good. He's slow; goes from sort of in shape to obviously not in shape; and the fight scenes are so heavily edited that it's not always clear what he's doing—though you can see that lifting his leg above his waist is an insurmountable challenge. Whatever production room superhero made that mess semi-coherent must have thought, "Wow, how is this guy even a thing?!" Well, he was a thing. A pretty big thing.

OK, I know you're wondering right now why I even like him. I sound like a snob who doesn't want to see an average guy kick some ass.

No, no, no—his flaws are exactly what I like. Our man is like a Major League Baseball player. If you drink a lot of beer and have 30 or 40 excess pounds, you're probably in more than good enough shape to be a professional baseball player. It's the same with Seagal. His inept acting, and whatever pseudo martial art he does, made being the hero accessible. He doesn't have the 'roid physique of Arnold Schwarzenegger and isn't Belgian kickboxer-jacked like Jean-Claude Van Damme. He's not flipping cars or doing splits between two moving trucks. He's beating up guys who, generally, have the courtesy to fight him one at a time. And he doesn't have an exotic accent from some distant land. He's that guy at the end of the bar who's complaining about his receding hairline and an increase in his alimony payments. Seagal is the everyman of action heroes.

So you're probably wondering what movie I'm actually writing about? Does it matter? We're talking Steven Seagal! But you want a recommendation, don't you? Let's take Under Siege 2: Dark Territory as an example.

He's supposed to be a disgraced Navy SEAL who was demoted to the kitchen in the first film. He beats the hell out of a bunch of people and there's something about a satellite and train, and he somehow makes a bomb out of kitchen ingredients. But, he kills the main bad guy, who, by the way, is wielding a giant meat cleaver while our guy is using nothing but his slaptastic mitts.

After the victory he says in his tough guy half whisper, "No one beats me in the kitchen."