Blast from the Past: Westworld

I’ve been watching the HBO series Westworld, which is awesome and I’ll definitely be writing about it later, but it got me thinking about its inspiration: writer-director Michael Crichton’s first theatrical release, 1973’s Westworld. I trotted over to Crossroads Video and rented a copy for $1.50.

Crichton, who studied English and later medicine at Harvard—quitting both before receiving a degree—wrote his first novels in secret under the pseudonym John Lange. He eventually moved to Hollywood, where his novels like The Andromeda Strain, Coma, Jurassic Park, and many others were made into popular films. Wildly inventive, Crichton was sort of the Jules Verne or Sir Arthur Conan Doyle of our time.

Westworld follows two friends—Peter Martin (Richard Benjamin) and John Blane (James Brolin)—as they visit Westworld, an Old West-themed amusement park, one of a trio of Delos Corporation parks that also includes Medievalworld and Romanworld, each of which is populated by lifelike robots programmed to fulfill each guest’s fantasies. It’s an interesting premise that explores morality, technology, and humanity’s hubris. 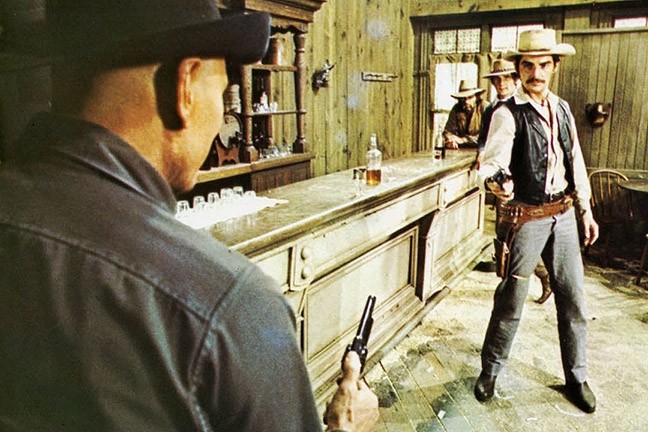 While John has already visited the $1,000-a-day park before, this is Peter’s first time, and watching him struggle with letting go of his morality and bedding down saloon girls and killing a gunslinger is delicious fun. What would you do if you no longer had to obey the rules of civilized society with no repercussions for your behavior? These are the same questions we’ve confronted with the advent of first-person shooter video games and no doubt questions we’ll confront when we inevitably do create lifelike robots designed to indulge our fantasies, both sexual and murderous. Amazingly, Crichton envisioned these ideas more than 40 years ago.

Of course, just because humans can create lifelike robots, the film (and HBO’s new series) question if we should. The technology begins to fail, and suddenly the robots that were meant to serve us and were programmed to never hurt a human being become violent. The second half of the film follows Gunslinger (Yul Brynner), a bot programmed to engage guests in gunfights and then lose … until it goes haywire and starts killing guests, focusing especially on Peter, who had gunned it down earlier. Brynner is fabulous in a role with almost no dialogue, using body language and facial expressions to emote the hidden life of a machine that’s transcended its programming. It’s a machine, but you feel sorry for it, a theme explored more fully in HBO’s series.

The final showdown between Peter and the Gunslinger is a display of 1970s cutting-edge special effects. The scene when the Gunslinger’s face is removed was startling at the time, and the film also marked the first time a film employed digital image processing to pixelate photography to simulate the Gunslinger’s vision. It was definitely ahead of its time. (88 min.)