Blast from the Past: Wild at Heart

"Today's Yellow Brick Road Leads Straight to Hell." That's the headline of a Caryn James review of Wild at Heart that appeared in a 1990 edition of The New York Times, and she's not wrong. 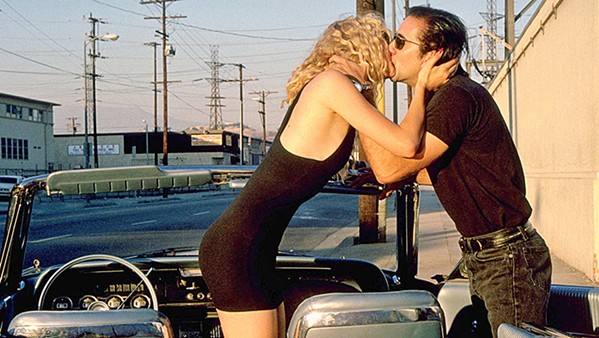 The bleak reality of a once-romanticized form of travel is a clear thread throughout David Lynch's twisted ode to The Wizard of Oz (1939) and other road movies of a bygone era, where the yellow brick road is rundown and lonely, Emerald City is a tiny town in Texas, the flying monkeys are hired killers, and Dorothy is a 20-something rebel on the run with a bad-boy parolee.

At its core, Wild at Heart is a formulaic, star-crossed lovers romance. It's Bonnie and Clyde (1967)—but in this film, Bonnie appears as Lula (Laura Dern), a young woman desperate to get out from under the roof of her overbearing mother, and Clyde as Sailor (Nick Cage), a recently released convict.

Despite her mother's orders, Lula immediately runs off to California with Sailor once his time in prison is up, a sex-capade that leads them down winding highways and to seedy motels in New Orleans and Big Tuna, Texas. But Lula isn't initially aware of the real reasons behind her mother's disdain for Sailor. The couple's trip is quickly spoiled by private investigators that Lula's mother hired to track and kill Sailor.

The more her mother tries to stop it, the more Lula and Sailor double down on their love for each other, their fiery passion fed to some degree by the forces trying to keep them apart.

It's a classic love story, but woven in are Lynchian characters, settings, and dialogue, and for some reason a lot of references to The Wizard of Oz, giving Wild at Heart an unsettlingly surreal yet comedic effect that only David Lynch can really create.

As in all things Lynch, the characters in Wild at Heart are each eccentrics in their own right. An overdone Southern accent paired with an affinity for Elvis Presley, all wrapped up in a snakeskin jacket that symbolizes his "individuality and belief in personal freedom," work together to bring us Sailor. Lula has her own zany qualities, too—not the least of which is a tendency to get hysterical, and her propensity to extinguish the hysteria by breaking out suddenly in dance.

The downside to many of Lynch's works is that the chaos created by his vivid characters and his totally unique way of storytelling often cloud the plot itself. But compared to Twin Peaks (1990-1992) and Blue Velvet (1986), Wild at Heart is a breeze to follow, and quite a bit less disturbing.

It's lighthearted and quirky, and best of all, it offers a rare glimpse into the softer side of Lynch. Δ