Blast from the Past: You've Got Mail

One of my favorite holiday movies isn't technically a Christmas movie, which means I can watch it any time of the year without my family shunning me or telling me I'm ruining whatever season it actually is. 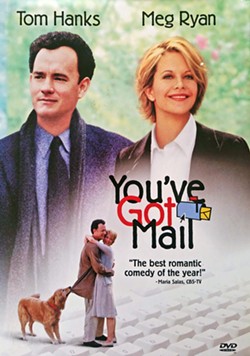 My criteria are pretty simple; to be a Christmas movie, the film must: 1) at least partially take place during winter, 2) have at least one plot-point occur while Christmas is celebrated, and 3) it must have a happy ending.

Nora Ephron (who wrote one of my other all-time favorite holiday movies, When Harry Met Sally) directed You've Got Mail, which she co-wrote with her sister, Delia Ephron (the duo also co-wrote several other screenplays, including Mixed Nuts, Hanging Up, and Michael).

The movie's storyline is borrowed from Hungarian playwright Miklos Laszlo's Parfumerie, by way of the Jimmy Stewart movie The Shop Around the Corner.

For the 1998 film, Ephron used the 1940 movie title as the name of the adorable bookshop where Kathleen Kelly (Meg Ryan) works. She inherited it from her mother and has maintained its status as a fixture of its Upper West Side neighborhood. The first few scenes of the movie are all autumn joy and optimism with the Cranberries harmonizing on the soundtrack. Kathleen, aka Shopgirl, is happy because she's been connecting online, via AOL (so very 1998), with NY152, who that very morning said if he knew who she really was, he'd give her a bouquet of sharpened pencils.

But then (cue the record scratch), the perky employees of the Shop Around the Corner see that FoxBooks Superstore, a Barnes and Noble-type big-box mega bookstore, is opening—you guessed it—just around the corner.

By now we viewers are privy to NY152's identity as the evil Joe Fox (Tom Hanks), who, along with his father and grandfather, is opening the big bad chain store that's out to destroy everything the West Siders hold dear. The trio are portrayed as decidedly money-grubbing, with very little concern about the impact they'll have on the neighborhood—even as Kathleen and her cadre of employees and her New York Observer columnist boyfriend mount an offense against the superstore.

In the meantime, NY152 and Shopgirl's paths are getting closer to crossing in the real world, but before their alter egos can connect in reality, Fox must deal with himself and the antagonistic relationship he and Kathleen have cultivated.

The movie's deepest moments happen during Christmastime, when Kathleen is grieving the loss of her mother and contemplating the fate of the bookstore that still holds them together. The scene when she's decorating the shop's tree, lovingly unwrapping and hanging her nostalgic ornaments, brings tears to my eyes every time.

The movie's amusing banter, eclectic (though still late-'90s) soundtrack, the Pride and Prejudice references and undertones, and the eventual understanding of the need for integrity between one's online persona and real-life behavior all come together in this delightful, if slightly dated, Christmas movie. (119 mins.) Δ