Blast to the past: Doc Brown's Time Machine Rental brings the DeLorean to you

After Back to the Future came out in 1985, the DeLorean became every nerd’s dream car. It was more than just the weird futuristic design or the cool gullwing doors that made the DeLorean so tantalizing, though. The impossible promise of time-travelling misadventures made the car so dear to nerdy hearts everywhere. 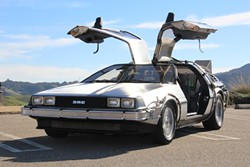 Thanks to Doc Brown’s Time Machine Rental, nerds, fans, and McFly-wannabes across the Central Coast can now at least partially fulfill their grand time-traveling fantasies.

The time machine rental’s business plan is pretty simple. The owners got a DeLorean and had it professionally transformed into a screen-ready replica of Doc Brown’s own time machine from the movies, complete with authentic sound effects, billowing CO2 smoke, and a fluxing flux capacitor.

According to the business’ spokesperson Nicolette Muñoz, Back to the Future writer and producer Bob Gale has agreed to sign off on the verisimilitude of the Time Machine. “For a collector or enthusiast, that’s like having George Lucas sign off on your Star Wars stuff,” Muñoz said.

Now that the time machine replica is complete and certified, the owners are renting it out for birthdays, weddings, graduations, and business meetings. For an added cost, they’ll even drive you around in it.

The owners seem very dedicated to staying true to the fantasy that patrons are actually renting from Doc Brown himself. They refused to allow their true names to be printed and when callers reach the business’s voicemail, they are greeted by Marty McFly telling them that Doc can’t come to the phone right now. This level of mystery and dedication adds an extra touch of fun to the proceedings.

“The owners are super geeks,” Muñoz said. “They love everything Back to the Future, Star Wars, Star Trek. This business is obviously something that they’re not making their living on, it’s just something that’s fun and will hopefully raise a lot of money for charity.”

The owners are donating a portion of all of the rental’s profits to Michael J. Fox Foundation’s Team Fox for Parkinson’s Research, and are seeking to partner with nonprofits in the county like the SLO Special Olympics as well, Muñoz said.

“We know that 2015 will be a big year,” Muñoz said. For those who are unfamiliar with Back to the Future 2, Marty travels to 2015 in that film and is greeted by a world filled with flying cars and hoverboards. Muñoz expects that many Back to the Future fans will want to celebrate the futuristic year of 2015 with the time machine replica, especially when the date of Marty’s arrival rolls around in October.

Doc Brown’s Time Machine Rental offers more than just the tricked-out DeLorean, they also rent out a hoverboard and other prop replicas, as well as a clocktower backdrop for Back to the Future photo shoots.

For more information about renting the DeLorean time machine, call (844) 362-2769 or visit the website at docbrownstimemachinerental.com.

“It’s going to be really exciting to see how our customers react to seeing the actual time machine in person,” Muñoz said. “And we’re super excited to have it make money for charity too.”

Congratulations Cal Poly! This year’s Cal Poly Rose Parade team just took home the Lathrop K. Leishman trophy for most beautiful non-commercial float in the parade. The float itself is frankly astounding; it features a large fairy-tale castle and a massive gryphon that looks like it’s about to take flight. It’s hard to imagine how much effort was involved in turning that fantastic image into a fully formed floral scene. This was the school’s 67th entry in the Rose Parade float competition, and the first time Cal Poly won this award.

Intern Cliff Mathieson is busy transforming one of the few remaining phone booths in SLO into a screen-ready replica of Bill & Ted’s time machine. Send your business and nonprofit news to strokes@newtimesslo.com.