I can't watch the video for Blind Melon's song "No Rain" without smiling. The bumblebee-costumed little girl who gets mocked at her talent show but then runs into the world to find her people is utterly charming. It's Little Miss Sunshine (2006) meets triptastic neo-psychedelic alt-rock, and it made Blind Melon a household name.

Sadly, the band's strong 1990s run came to a screeching halt when lead singer Shannon Hoon suffered a cocaine-induced heart attack on the band's tour bus in New Orleans on Oct. 21, 1995. Fans were devastated. The band tried to hold it together and released Nico, an album of unreleased songs named after Hoon's then-13-week-old daughter while they searched for a replacement. Then in March 1999, Blind Melon officially disbanded. 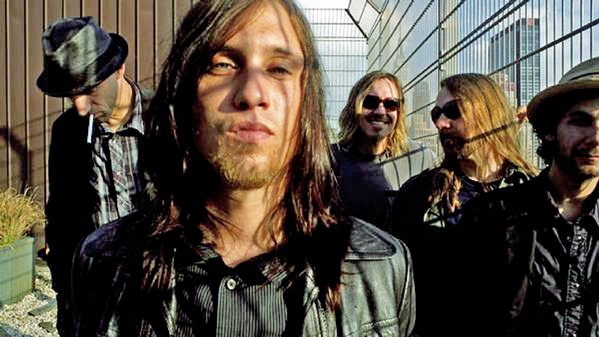 Blind Melon is currently on a West Coast tour that will stop at SLO Brew this Wednesday, Sept. 5 (8 p.m.; 18-and-older; $23 at Boo Boo's and ticketweb.com), the first time the band has ever played SLO County.

New Times: I think the first obvious question is what it's like trying to fill Shannon Hoon's shoes.

Travis Warren: Well, after doing this gig with Melon now for about 11 to 12 years, it doesn't really feel like I'm filling his shoes. I'm just stepping in till he wakes up from his much-needed nap. Shannon was a wild man! He was only in Melon from '90 to '95. The amount of material they put out in such a short time with Shannon is nothing short of amazing, especially given the content. That said, I'm very blessed to have this gig. I'm very grateful. Extremely grateful. I could be preparing dead bodies for cremations or working in a cubicle. Life is good. No complaints here my friend.

NT: Like former lead singer Shannon Hoon, I also know you had some drug problems but have since gotten clean. Any comment on that especially considering the band's history?

TW: Who doesn't have some kind of drug problem or an addiction these days? Be it money, drugs, alcohol, shitty foods, coffee, keeping up with the Jones, TV binging, laziness, women, jobs, gambling, sex, "doctor drugs," and on and on and on. Even working out can be an addiction as I'm currently finding out. America spends more money on health care than any other nation on the planet yet we are the sickest, fattest, most spiritually depleted, most depressed, most anxiety-ridden nation on the planet. How does that work? Eight out of 10 people here in America will die from cancer, heart disease, or diabetes. This is absolutely absurd. The problem and reasons why this is, is planted right there in plain sight yet most are completely oblivious to it. Why? Because we've been born and indoctrinated into a false belief system. We live in a country where most don't think critically anymore. We don't question authority anymore. We blindly believe what our media, government, doctors/Western medicine, alphabet agencies, and other corrupt institutions tell us. "He who controls the information, controls the people"—more true today than ever. What has changed in the last 150 years? Most of the issues we see going on today were virtually unheard of or were extremely rare cases over 150 years ago. Is it our "genes"? Have our genes changed in the last hundreds of thousands of years? I think not. Our environment has changed. These days, we have genetically modified foods, pesticides, geo-engineering, processed foods, sugars being replaced with high fructose corn syrup, which is pure evil, destroying our sea life with pollution and over-fishing, pharmaceutical drugs being handed out every time a new "illness" is "discovered." Most people in America are eating pure poison and they have no idea. Most food in our grocery stores is pure poison. What happens when we eat shitty foods? We gain weight, which affects our confidence (along with many other physical and mental issues). We get depressed. We get social anxiety. What happens when we get depressed or have anxiety? We take pills that the good doctors of America prescribe us rather than doctors telling their patients to stop eating shit food and start exercising. Why would our good doctors do that? Because that wouldn't be as lucrative as getting serious kickbacks from the pharmaceutical companies. It's about money, always has been, particularly in America. It has nothing to do with your mental or physical health. Just like Washington, greed, power, and manipulation have infiltrated big business, naturally. Am I blaming the doctors for this infiltration? No, I'm not. I believe there are tons of great doctors out there who want to do great things and heal people. Unfortunately, these types of characters aren't making the decisions at the top. The problem lies in the universities and med schools that are pushing this crap—Western medicine. As far as my own personal struggles? It's simple, really. I was sexually abused as a kid, suffered abandonment issues, dealt with mental illness, grew up really poor, and had no real guidance by the time I was 12. I never dealt with those traumas or scars. I buried them like we so often do. How did I "deal" with them? With lots of dope and booze. Slept around. A lot. Didn't know what love was. How could I? It's impossible to love others when you don't love yourself. Then I hit my bottom, decided to get sober and take responsibility for my life. Found God, meaning I had a full-on experience on Jan. 20 of this year that changed my life. Knew I had to stop living selfishly and start living empathetically through love and compassion. To serve others like Jesus, Buddha, Gandhi, Bob Marley, etc. That's key. As soon as I gave my life over to God, my life completely changed for the best. Opportunities started happening. It's that simple. God is real—make no mistake about it. I've been in his presence. The most calm, peaceful, loving feeling you could ever imagine. I'm an ex-heroin addict so I thought I knew what euphoria felt like. Take that and multiply it by about a few trillion. That's what God feels like. I stopped letting my past/fear dictate my future. I don't live in fear anymore. Only thing I fear is God himself and letting him down, which I hope I never do again. My goal in life is to be conscious of God in every decision I make from here on out and help heal this planet one face, one soul at a time. Through love and truth. Not judgment, pride, ego, greed, or manipulation. I try and live as Christ-like as possible. Still have tons of learning to do before I become the man I'm supposed to be. However, that's key to a happy life.

NT: What are the shows like these days? Do you do both old material and new? Are you and the band continually working on new stuff?

TW: The shows are literally better than they've ever been. The entire band feels that way. The proof is in the sauce/recordings. Glen, brother, I'm sitting on so much material I could retire for half a decade or more and put out a new album every quarter year. No shit. Hell, I might do that and go live with Shaolin monks for about a year and learn to levitate. And Kung Fu. Have Tara [Mills, his longtime girlfriend] hold down the fort while I'm finding my soul. Hell, she's been holding the fort down these past 12 years. That chick deserves a humanity award that's never been given out. She's an absolute angel. Melon is putting out a new album within the next year, which I think will be one of the best records we've ever put out, including Shannon's material. I'm also doing a new hip-hop type project as well as releasing a new Killwatt EP. Tons of new stuff in the works, my friend. When we get the records in, I'll personally bring 'em by, take you out to lunch, and bribe you to give a good review.

NT: What's it like playing your hometown, especially considering you tour all over now?

TW: Glen, I have to say that since Melon has never played SLO, I'm beyond excited. I'm so pumped, I feel like I can run through about 10 Lebron James' then turn around and run through about six Lawrence Taylors'. I hope that puts things in perspective for you and your audience. Folks who miss out on this show will be very equivalent to the folks who missed the moon landing. Pure energy. We're also having a special guest so I suggest everyone gets there early.

And speaking of SLO Brew, the new 609-person capacity SLO Brew Rock music venue located at their 30-barrel brewhouse near the airport at 855 Aerovista Place will host its first big concert next Thursday, Sept. 6, with reggae superstar Collie Buddz (8 p.m.; 18-and-older; $25 at ticketweb.com or $30 at the door). He's touring in support of Good Life, his first full-length album in 10 years. The album's first single, "Love & Reggae," hit No. 1 on the reggae charts. 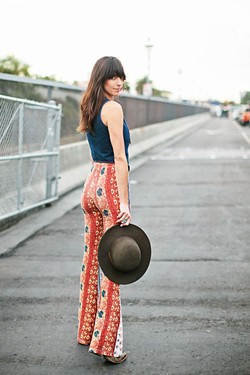 Numbskull and Good Medicine Presents have four shows lined up this week, starting with iconic vocal harmony roots reggae act Israel Vibration on Thursday, Aug. 30 (7:30 p.m.; 21-and-older; $25.50 presale at Boo Boo's or ticketfly.com, or $30 at the door), at The Siren.

Bluhm said in press materials: "These songs are quite personal. They are the conversations I never got to have, the words I never had the chance to say, and the catharsis I wouldn't have survived without." 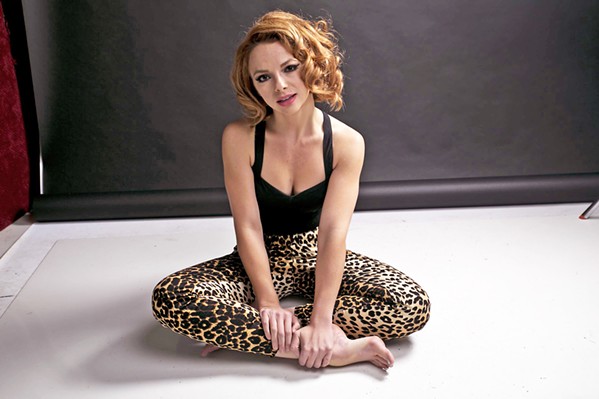 "You should always get outside of the box," Fish said in press materials referencing her new album Belle of the West. "Challenging yourself is how you grow."

A woman of heart and mind 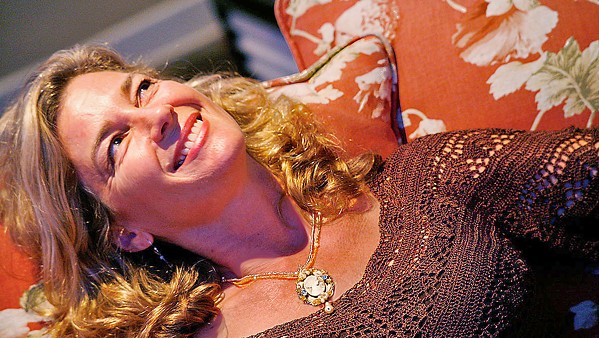 A celebration of Joni Mitchell featuring Kimberly Ford is scheduled for Saturday, Sept. 1, in the Fremont Theater (9 p.m.; all ages; $18 to $28 at Boo Boo's and eventbrite.com). Mitchell turns 75 this year, but she stopped performing more than a decade ago. Here's your chance to hear some of her greatest songs performed live by Ford, an amazing singer-songwriter in her own right.

"Playing the music of Joni Mitchell continues to surprise and move me as a musician and also as a woman," Ford said in press materials. "Her articulation of love, loss, and the constant search for truth have both a spare and laser accuracy." 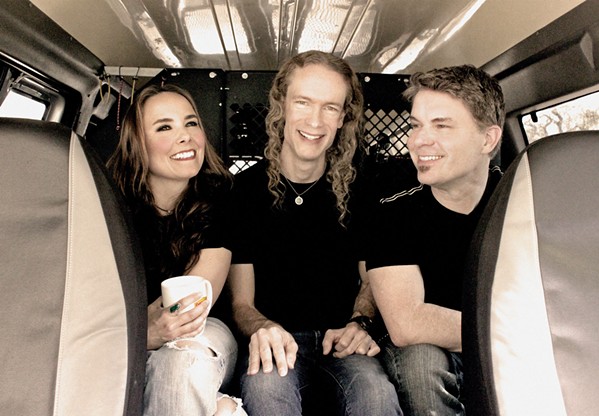 The Cliffs Hotel & Spa in Pismo Beach is hosting another free Live on the Rocks concert this Monday, Sept. 3, with local Cali-Cubano dance band The Zongo All-Stars (1 to 5 p.m.; all ages; free). If you've never been to one of these shows, don't miss it! You may have to park a ways away, and you should bring your own low-back chair or blanket, but this is a great place to see live music on the cliff above the Pacific Ocean. The Cliffs serves up great craft beers and cocktails, and there's barbecue and other great food (No outside food or beverage, obviously! The music is free!). Δ