Blog or be blogged

SLO County bloggers are getting busy, but does anyone care?

Blog (weblog) n : a shared online journal where people can post diary entries about their personal experiences and hobbies.

In the last two years the media has been fixated on blogs and the image of the pajama-wearing writer obsessively posting his or her personal punditry on the Internet. Throughout the presidential election we watched and wondered if blogs would indeed make a difference in the outcome of the race. Would citizen journalism take over, toppling mainstream corporate media? In some ways we witnessed a silent coup d'etat of democratic force, cyber-style. We want our news and we want it now, bloggers said, demanding press passes at political conventions and access to White House press briefings.

But did they make a difference?

It's hard to say, but you could likely find the answer on a blog or two. And perhaps as a result of the abundance of blogs on the Internet, some SLO County citizens have heeded the call. They want media reform and they're the ones to do it, they say. They're here to blog and they're here to stay, but does anybody really care? 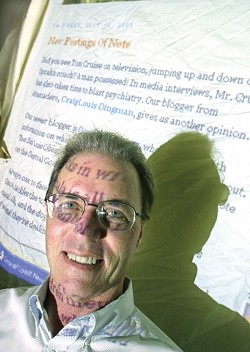 #"I think it's high time that the community avail itself of the Internet in a way that's quite simple to do," said McClure. "With a few clicks of the mouse, they can read what's going on from people who are involved enough to write about it."

"Since blogs are... public diaries," she writes. "It's also an interesting exercize (sic) in blurring the public/private line, with some blogs embarrassingly (sic) personal... but all of them remain akin to hollering down an empty well in hopes that there are some frogs down at the bottom who will hear you."

Calhoun's commentaries, with titles like "Walking While Stupid," "Duh Time Again," and "Holy Marching Orders," run the gamut from national political issues to locally divisive topics such as the Los Osos sewer project.

And Calhoun isn't the only one raking Los Osos muck in the blogosphere. Ron Crawford keeps Sewerwatch (http://sewerwatch.blogspot.com/) going. Crawford delivers "Sewerwatch Exclusive(s)," like his July 8 post where he wrote that the "Los Osos Community Services District could have saved as much as $6.2 million, and, likely, much more, if a wastewater treatment facility currently proposed to be built near the center of town would have been moved to a site outside of town last June, according to a LOCSD memo recently acquired by SewerWatch."

Hot stuff for citizen journalism, and Crawford just started his blog in June.

"Oh what the hell ... let's try this - a Los Osos sewer blog," Crawford wrote in his first posting. "Why not? I have to admit, though, I'm very lazy, so we'll see how regular my postings are."

McClure, who goes by the handle of Newsstand Greg on News Mission, said he hopes his blog will provide the community with an empowering platform, and claims he's already seeing his daily hit count increase.

"I realized what people really need from broadcasting, and I've since opened that scope up to any kind of electronic communication. What the community really needs is a better understanding of itself and a dialogue within itself about what really matters to it," he said. "And by doing so we can uncover, agree, come to some kind of consensus, and educate ourselves."

But unlike a lot of bloggers, McClure actually has a background in media. He worked in broadcasting for 20 years in San Jose, Seattle, and San Luis Obispo. Most recently he was the production director for KVEC, where his discussions with broadcast host Dave Congalton led to the idea of conceiving a Central Coast news blog.

In 2001 McClure suffered six strokes and experienced an epiphany of sorts. The blog is the result.

"I realized I was born again and I'm thinking, 'Why am I still here? I could have died,'" he said. "And the message I got from my spiritual general manager in the sky was to help your friends achieve their goals and to find a family."

McClure said he found love and now he's helping friends and his community by blogging.

"So far this has cost me nothing but my time," McClure said. "This kind of effort, when you really believe in it as I do, takes heart and soul."

To help him inform the community and create change in Morro Bay, McClure has recruited Jack McCurdy, who's a founding member of the Coastal Alliance on Plant Expansion (CAPE) and former writer for the LA Times. McCurdy, whose updates will be part of "The Inside Morro Bay Team" at the News Mission blog, hasn't started writing for the blog yet, but he's excited about the possibilities.

"We want to get a spirited discussion going," he said, adding that he hopes the New Mission blog will help fill the void of critical journalism in Morro Bay.

Another local blogger, Craig Baracco, has proven his dedication, as he's been blogging for what could be considered a lifetime in the blogosphere - over a year and a half. After working on various political campaigns in Sacramento and San Jose, Baracco started Craigorian Chant (http://craigorianchant.blogspot.com/). Baracco's musings mostly pertain to national politics, but he's never been afraid to pen a locally oriented commentary for New Times.

Baracco, a self-proclaimed political junkie, said even after a year and a half he still enjoys updating his blog daily.

"Sometimes I just don't have the juice to put out a commentary or insight on anything," he said, in which case he'll link to another interesting posting on a separate blog. "I kind of get nervous if I just leave it for a while, thinking about people checking it without getting anything new."

Craigorian chant averages about 30-40 hits a day, said Baracco, with his biggest days of 100-200 hits happening during the presidential election.

Baracco says blogs are free so you get what you pay for. "I think because you can select viewpoints, you can stick to left- or right-wing blogs. You can end up with tunnel vision."

To counteract that, Baracco tries to link to alternant viewpoints often. There's also the Tower of Babel effect of more voices adding to the general mass of confusion, drowning other voices out. But that's a concern that the Central Coast and McClure don't seem to have to worry about yet.

"For as long as I can recall, which is probably all my life, I've been a seeker of truth," said McClure. "And the older I get the more I realize there are a number of truths to be sought. If you're seeking truth, that means you're trying to plow through the underbrush of untruths - other people may call them lies.

"[With blogs] we can learn and develop a consensus about what's important to us, then quite likely find some solutions for action," said McClure. "So we can describe a problem, experience it, analyze it, propose solutions, and agree on some kind of approach and then start taking some action."

Staff Writer John Peabody can be contacted at jpeabody@newtimesslo.com.