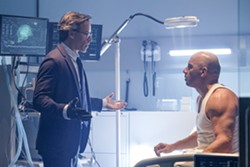 Dave Wilson directs this sci-fi action film with Vin Diesel as Ray Garrison, a slain soldier brought back to life and outfitted with regenerative powers, making him virtually indestructible. Unbeknownst to him, he's part of a secret project carting out extrajudicial killings, though he thinks he's avenging his murdered wife (Talulah Riley).

Glen This is the sort of middling film critics love to pan, and indeed, there's a lot not to be impressed by here. The very premise is repetitive. The small amount of charm found in the trailer—with Diesel's character asking if a song is playing on a loop—isn't even in the film. It's the sort of schlocky paint-by-numbers action we've seen again and again. Still, I found myself entertained. Diesel's a dependable lead, and while there's nothing here that requires much effort of him beyond looking hulking, squinting, and pulverizing his opponents, it's still a bit of fun. The bad guy is Dr. Emil Harting (Guy Pearce), who runs the project that brought Garrison back to life and also made cyborg-like soldiers out of KT (Eiza González), who's alive because of a breathing apparatus implanted in her neck; Jimmy Dalton (Sam Heughan), who's outfitted with two prosthetic blades for feet; and some other henchman character so forgettable I can't even remember what his enhancement is. KT is the only one of the quartet of baddies who's got a conscience and questions how they're manipulating Garrison to carrying out the killing. But since Harting can cut off her breathing with the push of a button, she's at his mercy. The film's basically about Garrison realizing he's Harting's puppet and finding a way out. If you're in the mood for a couple hours of mayhem, it's worth a matinee if action flicks are your thing.

Anna Repetitive is right, and this one just didn't hold my attention. The whole idea of nanobytes that heal and regenerate immediately is an interesting way of creating a super soldier, but Garrison is less interested in Harting's missions and sets his sights on vengeance for the wife he begins to remember. Harting is an evil genius who isn't all that scary; he's more like a dude who has never been said no to. He wants his soldiers to fall in line, but he doesn't know what Garrison is really capable of. He can literally shut down his soldiers at the press of a button, and it just feels too easy for me. He's playing with fire, so you know in the end he's going to get burned. This role very well could have been Diesel—he is brooding and buff, the tough guy with a soft spot for the woman he loves. It's pretty predictable. The extended fight scenes didn't do a whole lot for me, but I'm not surprised. Action films can be a tough sell for me, especially if there isn't much going on storyline-wise. Bloodshot fell somewhere in the middle—a bit of a story and a bunch of action. I wouldn't give it a rewatch, but it wasn't a waste of time either. If over-the-top action gets your engines revving, you'll probably dig this one more than I did.

Glen Garrison's motivation is his love for his wife, who he "remembers" being killed by a revolving door of different faces—men that Harting wants killed. That love for a good woman is sort of a sweet idea, but what happens if Garrison learns the truth? All that's left is pure revenge against the man pulling his strings. The problem is Harting isn't much of an opponent, so the stand in is Jimmy, who augments his snazzy blade feet with some prosthetic extra arms, which if you've seen the trailer, you'll know what I'm talking about. He and Garrison battle it out on a high-rise, but one of the problems with this epic battle royal is that we by this time know that Garrison is literally indestructible. There's no question he's going to best Jimmy, and the film is basically a setup to coming sequels where Garrison, unshackled from Harting's evil plan, gets to mete out justice on his own terms with his new love interest KT. I can't imagine the coming sequels will be any more gripping. If Garrison can't be beat, where's the tension, right? The more I think about the film, the less I like it. This is the epitome of mindless entertainment.

Anna You're right—it's one you don't want to think about too hard because it loses whatever value it had when you do. I was frankly more entertained by the trailer, and when even those brief few moments aren't in the film, it's disappointing. KT brings in Wilfred Wigans (Lamorne Morris), an expert hacker who wrote the code Harting's guys used to program Garrison. He's kookie and meant to bring some wacky fun to the cast, but his character too falls pretty flat. Soon enough, the bad guys can't control our hero and thus we are given the epic high-rise battle that I found pretty boring. There's just not a whole lot here that is anything but mediocre. Granted, I'm not the target audience for this film, but if it turns into a multi-movie franchise, I will certainly be skipping the sequels. It does have some entertainment value, but unless you want to see the action up close and personal, this flick can wait for home viewing. Δ