As we’re sitting at the judges’ table, a tipsy fellow in a brown Hawaiian print shirt draped over an enormous belly saunters over and slurs, “If any of you want to take a break, I’m here for you.” Then he leans over and whispers in my wife’s ear, “You’re by far the prettiest judge.”

Judging is lonely business. We’re sequestered in a corner and not allowed to see the contestants mixing their concoctions. In fact, the rules explicitly say, “Please do not mingle with the entrants as we MUST maintain the integrity of our judging to ensure the continuing success of this event today and for years ahead.”

“He’s probably had sex with more women than all the guys in this place combined,” says New Times photographer Steve E. Miller. 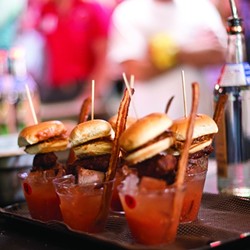 After I shake their hands, Anna leans over and tells me we’re going to need a tub of Purell: “You’re going to have to stick your whole hand in there!”

Soon after, the Bloody Marys start arriving, and over the course of the next 4 1/2 hours, I’ll taste nine, many with truly outlandish garnish—beef jerky, jumbo prawns, a lobster tail, stuffed olives, a giant artichoke, all manner of decorative vegetables.

Meanwhile, cocktail servers move through the packed crowd, selling small cups of the various entrants’ mixtures. This way, the crowd can determine their own favorite.

The next thing I know, Ron Jeremy is up on stage playing “The Saints Go Marching In” on the harmonica as The Shival Experience gamely plays along. 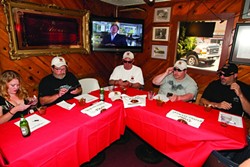 “Yeah, well, that’s not exactly what he’s known for,” I counter. “You try to ejaculate on cue.”

Then Shival lays down a funky version of The Commodores’ 1977 classic “Brick House.” It’s a party up in this joint! After trying the sixth Bloody Mary, the judges are given a break to eat some of the barbecue cooking out back, but after all the garnish I’ve consumed, I’m stuffed, so instead I watch a conga line form as Shival plays a Latin-esque Santana song.

The first Bloody up after the break is, as Anna describes, a “meatgasm!” It’s got a skewer with a pulled pork slider, a chicken wing, a pork short rib, and a potato on it.

Then Anna spots Ron sitting on a chair with his hand up a woman’s skirt: “Ron’s being a super creep.” 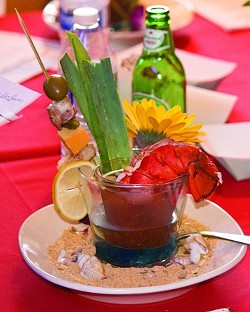 By the way, Ron is wearing black sweatpants and orange Crocs.

“You know you’ve given up when you show up to the bar in sweatpants,” Anna says.

“I don’t think he’s got to try anymore.”

Then the girl whose skirt was violated comes to the judges’ table and introduces herself as someone who works at a South County bar. And then her friend says, “I don’t work there, I just support,” while cupping her friend’s boob. You can’t make this stuff up!

Then I spot a guy dressed like a pirate out on the dance floor. Surreal. It’s hard to believe it, but I seem to be the most sober person here. Finally the judging is over, so Anna and I head to the bar, where the world’s sweetest, most fun bartender, Rayna Mena Storer, pours out three Breakfast of Champions—a shot of Jameson and float of butterscotch liquor and a slice of bacon. Mmm. Not a Bloody Mary.

In the end, there could be only one, and Alex’s Bar-B-Q wins Best Bloody Mary, with Pappy McGregor’s Pub at second place, and Mongo’s Saloon for Best Presentation. The crowd favorite also goes to Mongo’s. Now, let’s see about that tub of Purell.