Baywood's new seafood spot is a catch above

The Blue Heron is located at 1365 2nd St. in Baywood Park. For reservations, go to blueheronbaywood.com. Dinner is served Wednesday through Monday from 5 p.m. to close. 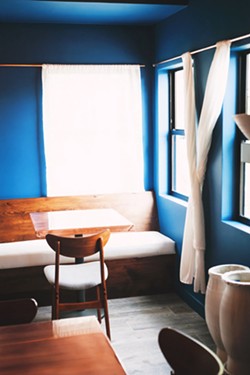 You can take the chef out of the farm, but you can't take the farm out of the chef. If you've eaten at Blue Heron lately, you know that this is a very good thing.

"Growing up we had chickens, pigs, a huge garden; we farmed just about everything we ate at home," Drahos said. "I took the butchery and cookery from my family's ethics, and that way of sustainable living, and put that back into my food."

If Baywood isn't the first place you'd think of for "farm to table dining," you're not alone. Located in a sleepy back bay community, steps from the legendary Merrimaker watering hole and cult favorite Noi's Little Thai Takeout, the Blue Heron straddles that elusive line between upscale and chill.

Out front, a fire pit burns, illuminating a well-crafted garden flush with native plants. Out back, an entire wall of flowers brightens a breezy patio, which looks out onto the placid water.

The menu is a reflection of Baywood's dual nature: You can grab a plate of impeccable pan-seared scallops, super fresh raw oysters, or a big beefy burger—your choice.

"We're so close to the water, and we asked lots of locals what they wanted to see at this new restaurant. Overwhelmingly, they said, 'seafood,'" Drahos said of the concept.

However, this is more than your average chowder hut.

Flavors are developed based on seasonality first and foremost. Whether using California-caught fish, oysters from Grassy Bar Oyster or Morro Bay Oyster Company, butter lettuce from the farm, or colorful bounty supplied from a local farmers' market, the chef aims to bring together regional, fresh ingredients with trusted sustainable suppliers. 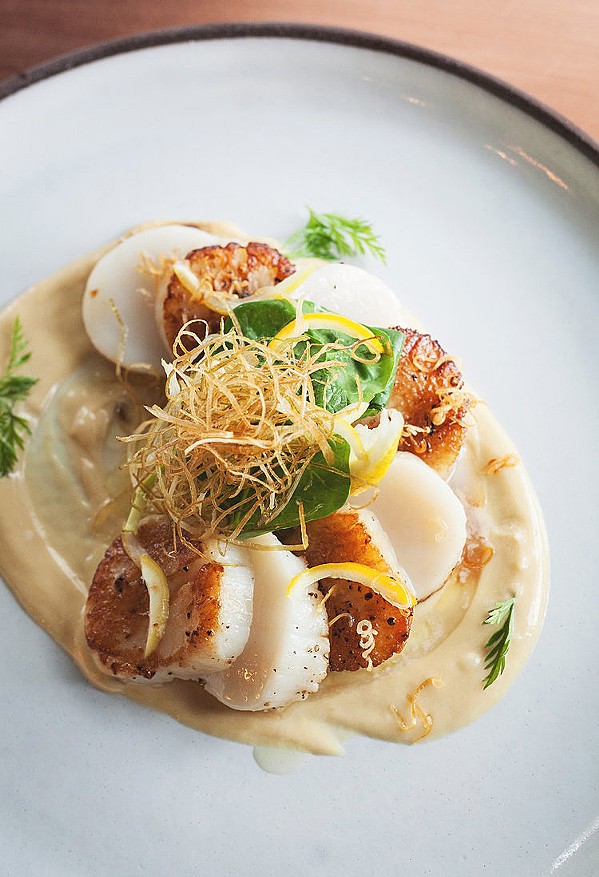 "We buy a whole fish and use every piece of it. The bones go to stock; we're serving it raw, pan-seared, smoked," the chef said. "Everything not used rolls back into the compost on the farm."

After working at prestigious restaurants from Napa to Oakland to Denver, Drahos is not one to compromise on creativity, either.

He thanks his upbringing for this well-roundedness. As a kid, he looked up to his aunt who worked at Hearst Castle. As a he moved from and short-order cook at Joe's Place in downtown Paso Robles to blossoming chef at Artisan and JUSTIN Winery, then later Vina Robles, and Windows on the Water.

He's done everything from molecular gastronomy to pastry to teaching demonstrations at Cal Poly. He's also even tried his hand at consulting, opening his own catering business, and starting his own Napa-area Champagne and tapas bar. 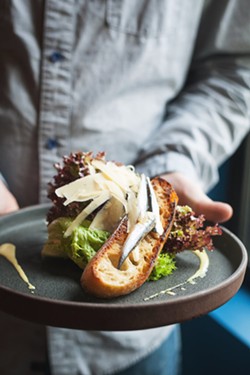 "I had been striving outside of this area for so long, but when I came back to the Central Coast, I realized that what I had been searching for was here, and I wanted to further my own creative passions at home," the said.

Along with Blue Heron owner Bill Lee, Drahos has been able to do just that. It's only been 16 months since the idea for Blue Heron was first born. A recent soft opening industry event revealed a fully developed restaurant with impeccably served seafood laced with sumptuous sauces.

"Two days after meeting Bill, I was designing the restaurant, and it wasn't long after that I had my eyes set on the farm," the chef said. "I knew I wanted to plant seeds, and I did: peppers, strawberries, onion."

Currently, a new greenhouse is bursting with fresh sprouts making their way onto Blue Heron plates. 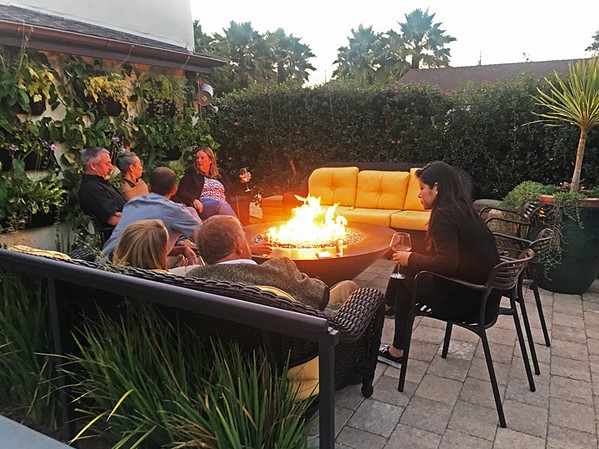 Pulling from sea, land, and familial tradition, Drahos may finally have arrived home.

"The produce, the fish, the farms, the ranches, the people, the wineries; I love this place," Drahos added. "I realized that the Central Coast is where I've wanted to be the whole time."