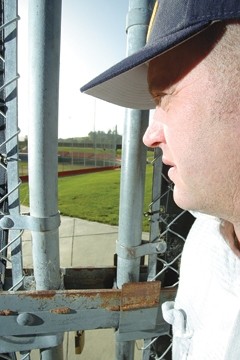 The right to use the brand and images associated with SLO Blues Baseball is being disputed by two former owners, even as the city moves forward on a contract for the team to use Sinsheimer Stadium.

The dispute was confusing enough that city staff and council members had to remind each other during the April 7 SLO City Council meeting that they were dealing with SLO Baseball Alliance, not SLO Blues.

Tim Golden, founder of the Blues as they exist today, claims he owns the name and the brand, even if he doesn’t own the team that will likely play SLO baseball this year. Meanwhile, Jamba Juice co-founder Joe Vergara, who became Golden’s partner in 2005, is signing contracts with the city as the SLO Baseball Alliance even though the Alliance continues to use the Blues’ logo on its letterhead.

Interviews with Golden and Vergara suggest that one reason for the confusion is they’re baseball men: They make deals with handshakes instead of contracts and as a result, matters boil down to one man’s word against another’s. And city officials say, in essence, it’s not their concern; they want the courts to sort out ownership.

However ownership shakes out, the name game’s just the latest bit of drama for a team that has had its share in the past few years. After city officials complained that the team wasn’t paying rent promptly, the team was sold to an out-of-town baseball-team owner, Steven McPherson, who ran into problems of his own. Last month, McPherson pleaded no contest to two felony counts of passing bad checks to settle Blues’ debts.

“Baseball’s not meant to divide community,” Golden said while standing outside City Hall as his friends and former partners argued around him. Vergara and Golden agree that early last year, Vergara approached McPherson about buying the Blues for no money down. The plan was that Vergara would buy out Golden, and McPherson would buy out Vergara.  In March, the deal was done. “Stevie Mac,” as McPherson called himself, owned the Blues and under his ownership, though perhaps not his management, the Blues had a record season.

But Golden was never paid for his share of the team, and he said neither were several other people who had invested in the Blues when it wasn’t worth anything. When Vergara sold the team for more than $500,000 (on paper) in 2008 it seemed as though their shares might have accrued value.

Then came McPherson’s troubles. He faces 32 months jail time when he is to be sentenced on April 29. Golden bought the team back from McPherson when McPherson was in jail awaiting release on bail, and said he’ll also take on the Blues’ debts if he gets the chance.

In January, Vergara formed SLO Baseball Alliance LLC—also called SLOBALL—with two former Blues coaches and they began talking with the city about a 2009 Blues season. The initial offer to the city by SLOBALL is on Blues stationery.

Vergara said he legally took back the Blues when McPherson defaulted on a personal loan, separate from the Blues purchase. As a result, on April 7 City Council members decided to move forward with a stadium contract with SLOBALL, even though they occasionally called the organization “the Blues.”

After the council hearing, Golden and his entourage met with with Vergara and his entourage. Little was settled, but team manager Mike Lara promised to get the finances sorted out with Golden.

“As far as the baseball team’s concerned,” Lara said. “There’s going to be a season. Then we deal with dotting the ‘I’s and crossing the ‘T’s.”