I remember the first time I saw Buddy Guy live. He was playing D.K.'s West Indies Bar around 1989 or 1990, and midway through his show, he jumped up on the bar with his guitar and made his way through the glasses and bar napkins as he played down the length of it. Later, he walked through the dance floor and out the front door, into the middle of Broad Street, where he turned around and played facing back at the nightclub as the doormen tried to keep patrons from following him out into the street with their drinks. 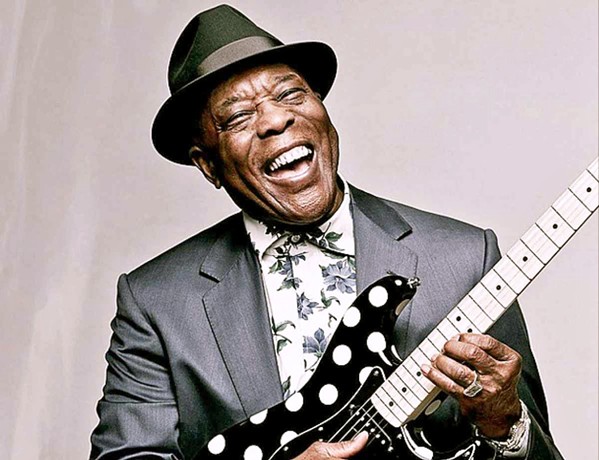 It was an electrifying show! That was around 30 years ago, and since the famed blues guitarist is now 83, I wouldn't expect such theatrics. But he's still considered one of the best Chicago blues guitarists alive, one who influenced the likes of Jimmy Page, Keith Richards, Stevie Ray Vaughan, Jeff Beck, Gary Clark Jr., and Eric Clapton, who once called Guy "the best guitar player alive." Rolling Stone ranked Guy 23rd on its list of the "100 Greatest Guitarists of All Time."

Guy's most recent album, The Blues Is Alive And Well (2018), is the eight-time Grammy Award winner's 18th studio album, though he's also recorded 10 albums with Junior Wells, five with Phil Guy, and one with Memphis Slim.

"I got children and grandchildren who didn't know who I was, but nowadays we can play outdoor concerts and see kids that are 8, 9, 12 years old coming to me and saying, 'I didn't know who you was, but I read what Eric Clapton said about you,'" Guy said in press materials. "I'm always trying to make an album that someone accidentally plays where some kid hears it, picks up a guitar, and helps keep the blues alive."

Kids under 7 get in free! Introduce them to the blues!

Also this week at the Avila Beach Golf Resort, Goldenvoice and Otter Productions Inc. present 311 and Dirty Heads on Wednesday, Aug. 14 (gates at 4:30 p.m.; all ages; $48 to $345 at eventbrite.com), with The Interrupters, Dreamers, and Bikini Kill opening.

Dirty Heads also melds genres, delivering alt-hip-hop, ska, rock, and reggae fusion. Add in ska-punk act The Interrupters, pop and alt-rock act Dreamers, and riot grrrl punk from Bikini Kill, and this promises to be a massive party near the beach! 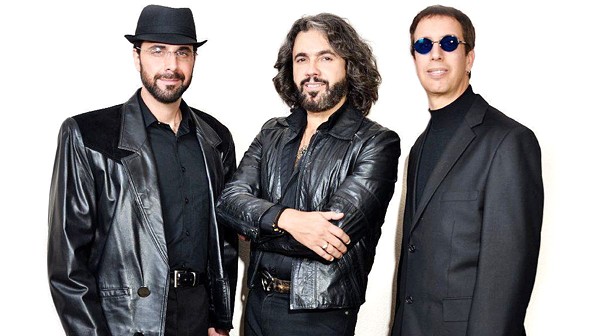 The vocal trio is backed by a live band, and attendees are encouraged to get decked out in their finest '70s attire! Dig through that closet and find those bell-bottoms and platform shoes, then get ready to boogie down like John Travolta! 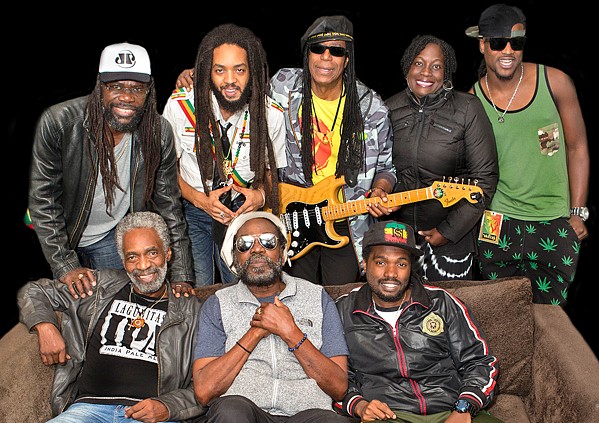 You can also see The Original Wailers next Thursday, Aug. 15 (doors at 7 p.m.; all ages; $24.96 at Boo Boo's and fremontslo.com). Just for the record, this group was formed in 2008 by former Bob Marley guitarists Al Anderson and Junior Marvin (who left the band in 2011). The pair began touring with Marley in 1975 after he went solo and Bunny Wailer and Peter Tosh left the band. Technically speaking, Anderson wasn't an "original Wailer," but he toured with Marley from 1975 through 1980 and played on some of Marley's best-known recordings. You're still seeing an important piece of reggae history!

"Harmony is no stranger to the music industry," according to press materials. "Growing up, she joined her dad, Chris, at music festivals and has since developed an inspired sultry, '60s throwback style voice. This father-daughter duet explores diverse musical genres while maintaining the honesty and purity found in the simplest of folk."

Local dream-folk duo Black Match opens the show. According to press materials, they push "emotional boundaries with musical tones resonating with your best and worst day. Heartfelt vocals and wise lyrics will put you in a dream state. The anthem 'Won't Let Go' undoubtedly would have been the song that Neil Armstrong played as he touched down on the moon for the first time, had it been just slightly earlier."

Vina Robles Amphitheatre has two big ones cooked up this week starting with Los Lonely Boys, Los Lobos, and Ozomatli on their La Familia Tour on Friday, Aug. 9 (7 p.m.; all ages; $45 to $59.50 at vinaroblesamphitheatre.com). All three Chicano bands are Grammy Award winners. This is going to be an amazing night of genre-jumping music! 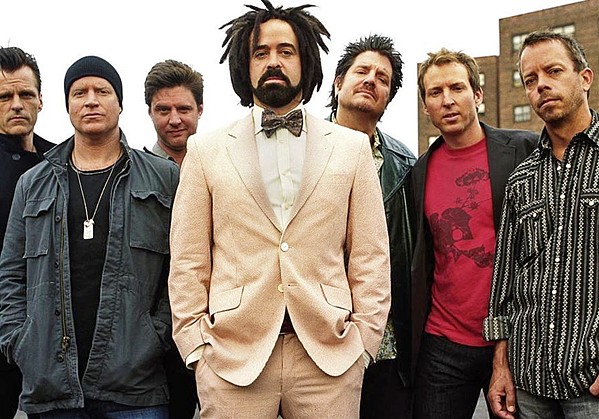 Rock chart toppers the Counting Crows play the Vina Robles Amphitheatre on Saturday, Aug. 10 (7:30 p.m.; all ages; $65 to $95 at vinaroblesamphitheatre.com). The band has scored a ton of hit songs such as "Mr. Jones," "A Long December," "Hangingaround," "Round Here," "Accidentally in Love," "Big Yellow Taxi," and more.

Numbskull and Good Medicine Presents is bringing country singer-songwriter Jon Wolfe to The Siren on Thursday, Aug. 8 (7 p.m.; 21-and-older; $15 presale at Boo Boo's or ticketfly.com or $17 at the door), with Joe Koenig opening. Born in Tulsa, Wolfe has since made Austin his home. He's touring in support of his fourth album, Any Night in Texas (2017), which has generated the singles "Boots On The Dance Floor," "Baby This And Baby That," "Airport Kiss," and the title track.

I remember when Frog & Peach Pub was Swensen's Ice Cream. It was the go-to place to take a date in high school. On Aug. 11, 1994, Ash Management re-opened Swensen's old location at 728 Higuera St. as the Frog & Peach Pub, and it sold only beer for its first 12 years in business.

It still has beer, and lots of it on tap, from Firestone Luponic Distortion to Lagunitas IPA to Rogue Hazelnut Brown. Twenty taps total, plus a full bar for the last 13 years. It's also the last seven-nights-a-week live music venue standing in downtown SLO.

"What a long, strange trip it's been," Bill Hales of Ash Management said. "Literally, I can remember Aug. 11, 1994, like it was yesterday. I remember opening night and all the characters who've come through there. A lot of old timers are going to be there Sunday, guys who played opening weekend, like Doug Grosshart of the JD Project. I'm looking forward to the next 25 years."

In addition to Grosshart and others, Seattle-based rock duo Deify plays at 10 p.m., offering up modern blues-rock from brothers Duncan (vocals, guitar) and Jared Byargeon (percussion).

The Commanders Jazz Ensemble, part of the U.S. Air Force Band of the Golden West, will play a free concert at Cuesta College on Saturday, Aug. 10 (7 p.m.; all ages; free tickets at http://bit.ly/CPACUSAF), in the Harold J. Miossi Cultural and Performing Arts Center (CPAC).

"This is our only free show of the season, and we love that it provides an opportunity for community members to experience this incredible venue for the first time," CPAC Supervisor Joan Hurwit said. "When we hosted the U.S. Navy's Sea Chanters Chorus last year, it sold out well in advance for a good reason—it's going to be an incredible evening!"

Ushering in the sacred