It all started with painting sports murals for teams like the Minnesota Vikings back in the 1980s. That led artist Tom Shultz to painting retro cars, and then his focus continued to shift even further, to the road.

“The cars got smaller and the landscapes got bigger,” the now Atascadero-based Shultz said of his gradual journey toward focusing on creating paintings of the natural beauty of the outside world. “Then the roads disappeared and it was pure landscape. It’s just an evolving, changing idea.”

Shultz’s work, along with the paintings of artists Patrick Adams, Donald Archer, and Tom Peck, is currently on display as part of the exhibit of abstract expressionist landscapes called Dirty Pictures, currently on display at Studios on the Park in Paso Robles. The name is a fun, cheeky nod to the fact that landscape scenes of course feature a lot of of dirt, and the quick, varied brushstrokes employed in the pieces in this exhibit also give the paintings a sense of movement and earthy grittiness.

Now Shultz has moved his focus beyond the roads and hills, he’s looking up—at the sky and the great beyond. It’s made him calmer and brought the artist a sense of peace. 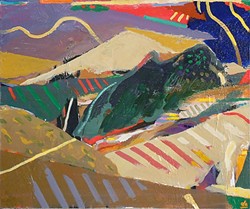 While Shultz started out with pretty representational art, his co-exhibitor Archer came from an abstract background and worked his way over to the more life-like side of things, before bouncing back to more familiar territory again.

“It’s in my genes,” Archer said of his tendency toward an abstract style. He even toyed with representational pieces for a time in the 1980s, but found that kind of work didn’t make him happy. “I began to make a distinction between a picture of something and a painting.”

Archer is currently based in Cambria and takes inspiration from the beauty of his home base as well as scenic spots like nearby Big Sur and Ojai. Vibrant colorful lines give Archer’s paintings a playful sense of movement that isn’t always present in a photo.

“The painting has an energy,” Archer said. “It has a life of its own.”

Above all, Archer hopes to shift people’s moods and maybe even change their perspective on the landscape. When you look at one of Archer’s paintings, he wants your eyes to bounce around like a pinball machine, unable to focus on just one aspect of the work for too long.

“I want people to see the landscape in a new way,” Archer said. “I want to make something that’s uplifting and inspiring.”

Ryah Cooley isn’t afraid to get her hands dirty at rcooley@newtimesslo.com.